A RAM upgrade is the best thing you can do

About 18 months ago I was approached by a client (as I often am I guess) and she posed a question that made me wonder if Canberra was getting the best Apple support possible.

She rang me in a panic because she had 3000 photos on her iPad (and nowhere else) and she had just been told by the Apple store in Italy that the only way to get those photos off her iPad was to sync with iTunes. Fine advise but when she pointed out that iTunes was, for some reason, wanting to erase her iPad and she’d lose them all, they were stumped.

They basically told her to brace herself and start again.

She was frantic and contacted the store in Canberra and was told the same thing. Nothing can be done.

This is where I came in and instantly I was confused. I knew of a method, a simple method that I assumed everyone knew, but she had been told by two Apple stores that it wasn’t possible.

Was I wrong? Was I delusional? Had I missed an iOS update that rendered my solution useless? Was I – heaven help me – obsolete or, as Monty Python might say, an ex-technician?

Of course I hid all of this doubt and the ever increasing waves of self loathing and agreed to look into the case.

Needless to say, my solution worked just as I expected it would and in the face of the misinformation the client had received I looked like a miracle worker.

A happy ending for sure but it made me wonder why the Apple Store had steered her in the wrong direction. On top of this I had been hearing stories of very bad customer service from the Apple Store here in Canberra and my friend in the UK had been telling  similar stories. In fact he said that when he was in an Apple store he was “treated like dirt” because his mac was an old one.

I have to say I was sceptical, all I had ever heard  about the Apple store was their attention to customer service – an attention that frankly boarded on the creepy and made you feel as though you had just wandered into a cult.

So, armed with these two questions I decided to walk into all the Apple stores and access their customer service for myself. I decided to pass myself off as someone who had just discovered how to power my mac on. Also I  would pose them the same question; “I have an iPad that is threatening to wipe itself clean and I had thousands of photos on it – help”

My quest would see me travel to Newcastle in England, London, and Paris.

My first stop was in the Apple Store at Eldon Square in Newcastle Upon Tyne. This is my home town so I had no trouble slipping back into a thick Geordie accent and wondering into the store looking like I had just entered the promised land.

Most Apple Stores look great but this one stands out, not because it is anything special but because Eldon Square has all the appeal of – as Sir Les Patterson once said –  a dropped pie.

I walked in and was immediately greeted by no one. I stood there some more, still nothing. Eventually I took matters into my own hands and walked over to a young girl holding a clipboard and sporting a headset. I wouldn’t be so bold as to describe the look on her face as friendly but she certainly wasn’t hostile…. I guess for arguments sake lets say she was indifferent.

I explained my problem – I have an iPad that is threatening to wipe itself clean and I have thousands of photos on it and I need help – and a puzzled look ran across her previously indifferent looking face. After a moments thought she told me not to worry as all my images should be in iCloud and so if the iPad was wiped I would get them all back again. I imitated surprise and gratitude and walked out, seemingly relieved and saved. I was neither.

There was no proof that I had even turned on iCloud or that I had access to a network. For all she knew – or cared it seemed – when I did wipe my iPad there would be nothing in the cloud and everything would be lost.

I wouldn’t go so far as to say that the service I received was terrible but the technical advise was shallow and misguided. Not a good start. 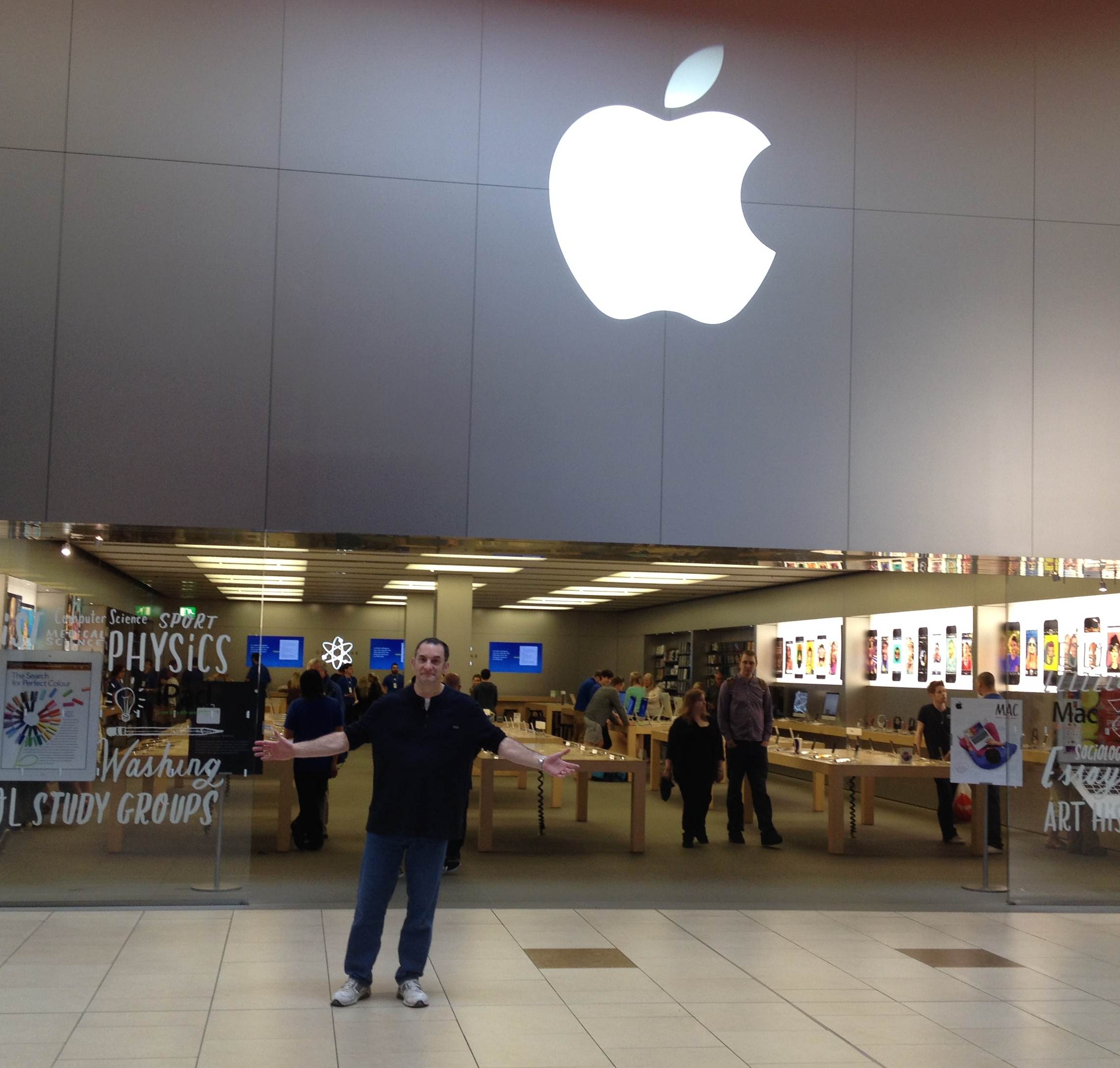 Apple often find some truly awesome buildings to house their flagships but few, I think, can match the store at the Louvre in Paris. Situated in the huge shopping complex that surrounds the Louvre, the Apple Store faces the inverted pyramid that, according to Dan Brown at least – is the resting place of the Holy Grail.

Armed with my Eldon Square experience I ventured into the small Apple Store bracing myself for the language barrier that was undoubtedly heading my way.

As soon as I stepped through the door a blue t-shirt pounced on me. I began with “Bonjour” (one of four French words I know) followed very quickly with “Parlez-vous anglais” (the rest of the words I know)

Needless to say he spoke better English than I do so I had no trouble asking him the same question.

He told me it was no problem at all and guided me toward a waiting Macbook. At this point I was expecting him to tell me what I already knew, that there was this little application…..and so on.

Of course! I felt so stupid! How could I have missed that?

He rightly explained that if I connect my iPad iTunes will launch but that I should quit it straight away. Then, open Image Capture and I will see all my photos. From there I can download them to the desktop and then, if I felt brave, reopen iTunes and see what happens. But the main thing was, my pictures would be safe.

I thanked him and felt, genuinely saved and relieved. 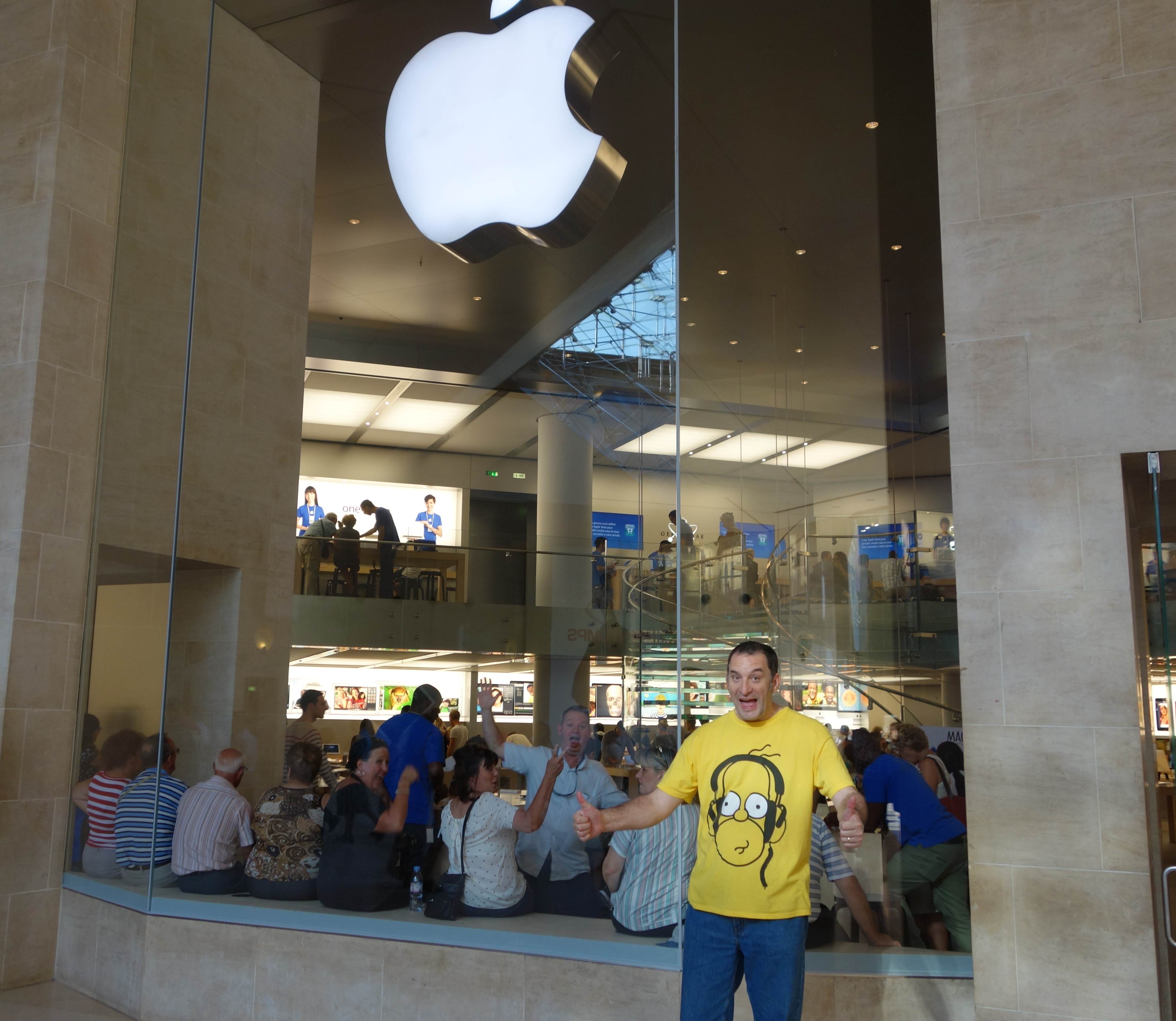 This Apple store had answered the question correctly and the service I received was fast, friendly and efficient. But it left me wondering why, if Apple had an application that solves the problem, had my client been told in two countries that she was doomed?

My final destination was London and the store in Regent street.

Like most of London this store was packed and full of activity and noise. It wasn’t surprising, therefore, that I wandered around for a little while before someone approached me. This time though, I had a secret weapon in the form of my friend who had been treated so badly in the past. While I shuffled through the store waiting for someone to approach me, I had my friend pose a real question peppered with genuine need.

The blue shirt that came to my rescue gave me the same advice as his French colleague so at last I was getting a consistent story.

I am also happy to report that my friend was very pleased with the service and advice he received and the experienced help to turn him around. 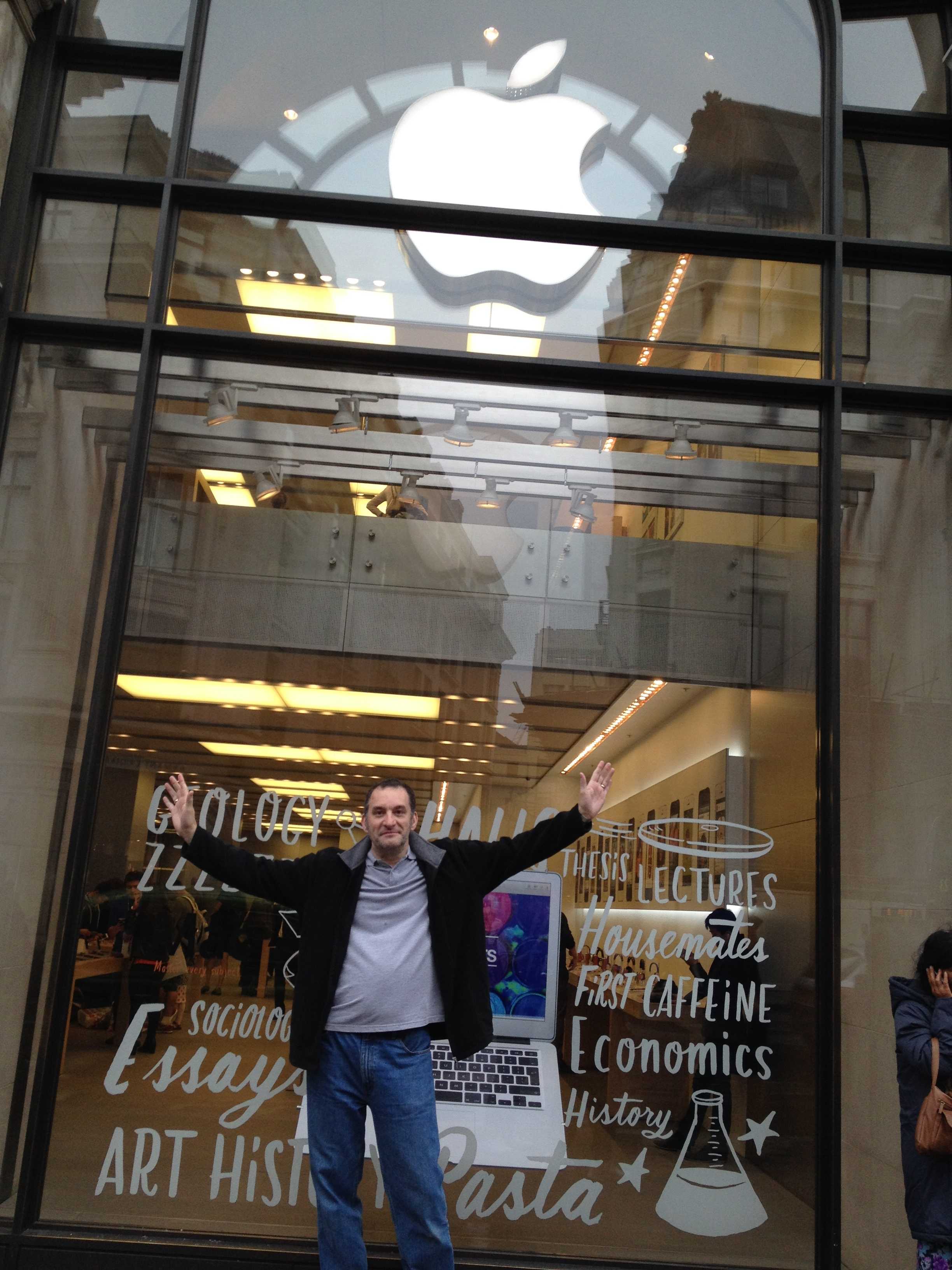 So what did any of this prove?

Well for me it proved that the Apple Store, while it is slick and impressive, is not the final word in support. It is of course a decent place to shop and the experience is nearly always a good one, but when it comes to support I think there is no substitute for experience and you can find that in many places.

Permanent link to this article: https://macservicesact.com.au/apple-stores-posed-the-same-question/