Apple don’t make it obvious but it can be done

Cloud storage for a Mac user 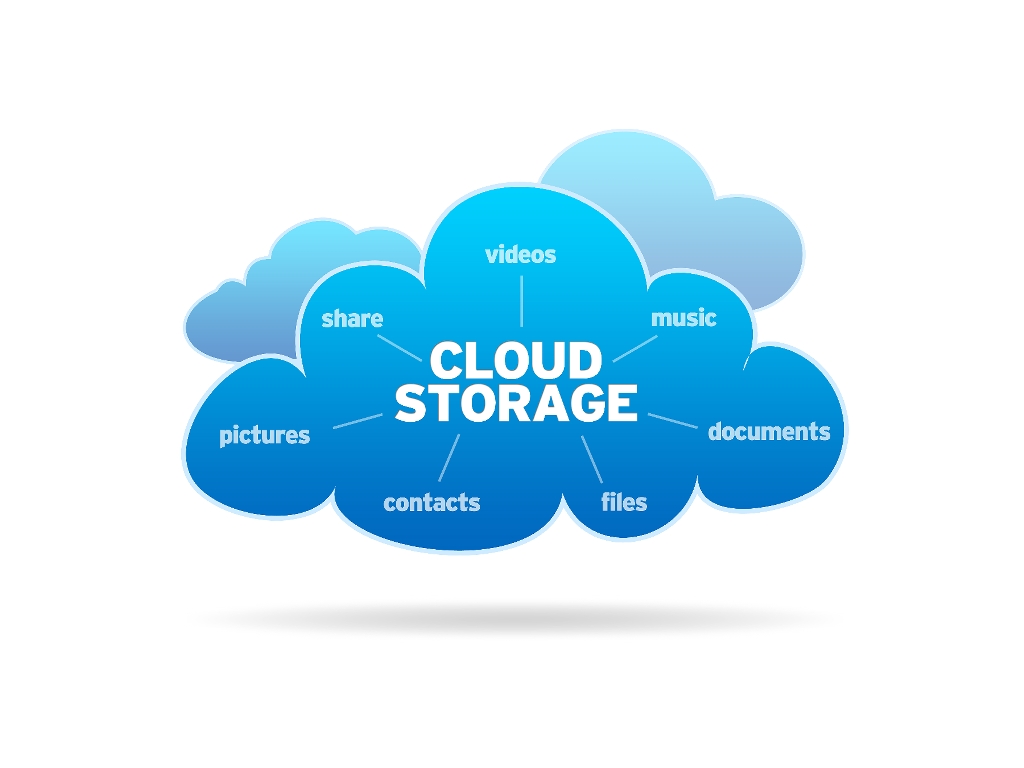 Editors Note: Originally this post was going to be a study of cloud services and how they work with the various desktop and iOS applications. However, as it is too often the case, I got side tracked into the new costs facing Microsoft Office users. This issue is a little more serious, and as it turns out more complicated than first thought. There are moves afoot that will affect how you are able to buy Office for your home computers and I hope to explain this further here.

Most people these days have more than one computer, even if that “computer” is an iPhone. One of the major issues with this spreading of devices is the retention of documents and the sharing of files between them. To address this issue Apple have been pushing iCloud as THE place to store your documents. They have also – just to further rub cloud based storage into our collective faces – been pushing software distribution to the cloud. Gone are the days of CD or DVD based software. No more boxes to fill up the shed and no more manuals to prop up shelves and gather dust. This is all well and good if you have a strong and generous internet connection but as this trend shows no signs of slowing down all we can do is look to services that do it well. (aka, NOT ChromeBook)

But Apple isn’t the only one pushing these services and Mac users have been seeing more and more of Office 365 and Google Docs and they all come with cloud based storage solutions.

So which is best for a Mac user?

Lets start with the basics and explore how each approach works for the end user.

Here is a familiar scene….

You buy a new Mac and take it home. You turn it on and it guides you through a very quick install process, a process that encourages you to enter your iCloud/Apple ID details or at the very least create one then and there. Doing this infuses iCloud into the operating system giving you storage space in the cloud, syncing services for Photos and documents, Calendars, Address Book and a free email address. If and when you get an iPad or iPhone and you enter the same details when prompted the two devices will be buddies and will from now on swap files and data without troubling you again. 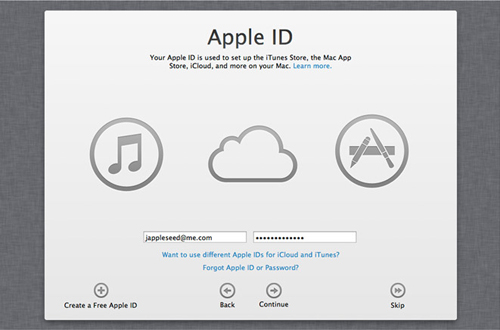 Now that the iMac is plugged into the web and iCloud is running you realise you don’t have a word processor and you are just itching to write that letter to the Times.

For the purposes of this exercise I am going to assume that you want Pages because that is what is on your iPhone or iPad.

You launch the MacApp Store application on your Mac, look for and purchase Pages. It is $20.99 with no more to pay. It weighs in at 372MB and takes about 10 mins to download on an average internet connection. It automatically installs and as soon as you launch it you are offered the chance to save to iCloud or the local Mac.

From here anything you create in Pages and save to iCloud is instantly available and fully editable on your iPad and iPhone via iCloud.

All is right with the world.

However, iCloud doesn’t offer a web based word processor. So if you are without your Mac, iPhone or iPad and want to edit that resume in a Qantas lounge you are out of luck. It is true iCloud will let you download the document to the desktop but unless that foreign Mac has pages installed thats no use at all. 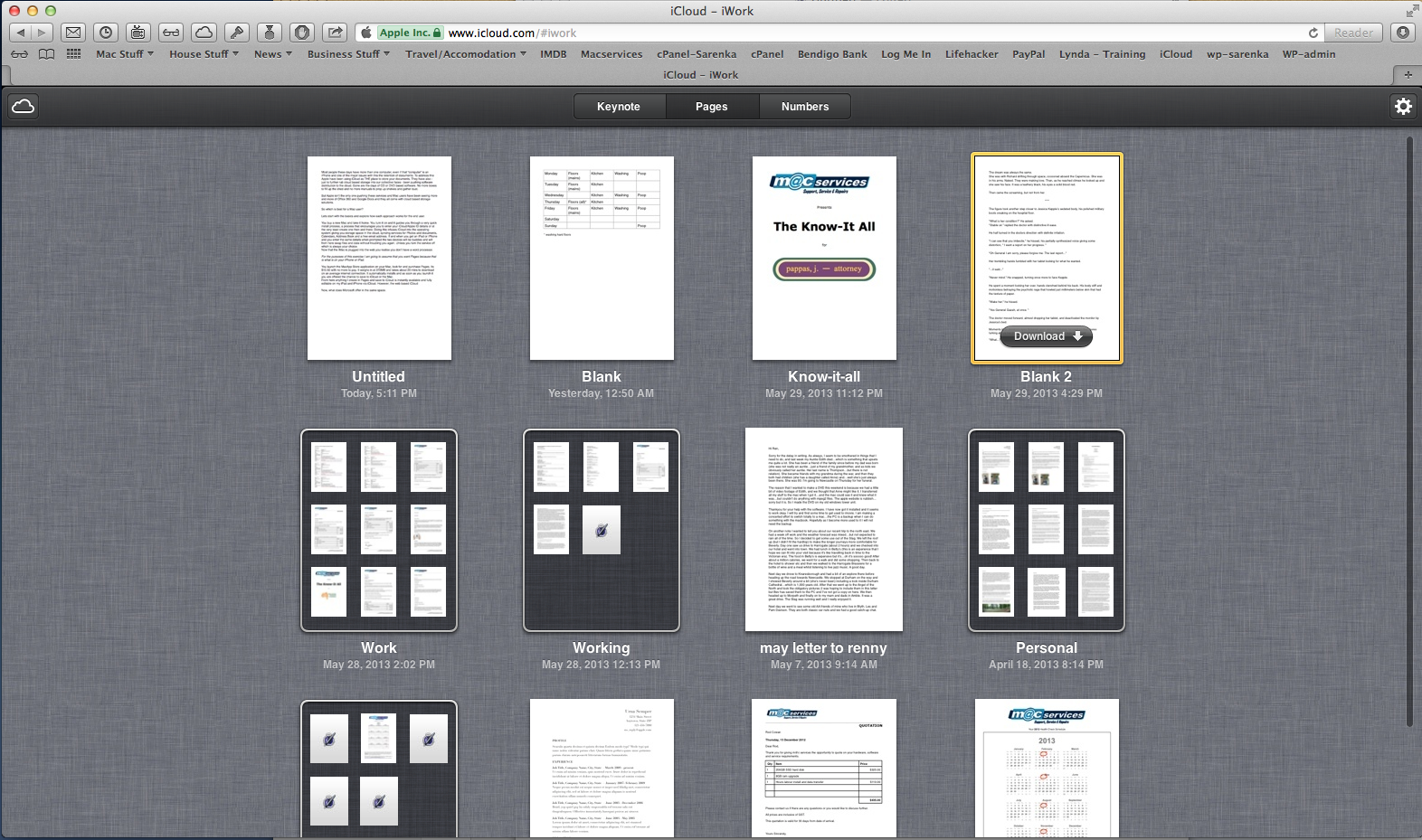 Now, what does Microsoft offer in the same space.

You buy a new Mac and take it home. You turn it on and it guides you through a very quick install process, a process that encourages you to enter your iCloud/Apple ID details…. needless to say “same same”

Now that the iMac is plugged into the web you realise you don’t have a word processor.

For the purposes of this exercise I am going to assume that you want Word because that is what you use at work or at school.

In order to parallel the Apple experience (a full featured locally installed Word Processor) you first need to subscribe to Office 365 by going to www.office365.com and this will cost $12.00 a month for a single home user.

Once connected you can download the full Office suit to your Mac. This weighs in at 1.01 GB and takes about 50 mins to download on an average internet connection. After download you need to install the software (just like you did if it came on a CD).

I have been told that this may change if/when Microsoft offer the same Instant Deploy feature to the Mac version Office that they currently offer with Office 2013 for Windows.

Once this has been installed you need to go to http://windows.microsoft.com/en-us/skydrive/download and download the SkyDrive application for your Mac and you can pickup the SkyDrive App for iOs from the Appstore. This is free service, setup is easy and all you need is a live.com account to get going. If you don’t have one you need to set one up. SkyDrive isn’t part of the Office365 deal but it does offer a cloud based service similar to DropBox or Google Drive.

Now you fire up Word create and save a document to your SkyDrive folder on the Mac and it will be available to you via a web browser when you log into skydrive.com or from your iOS device with the free SkyDrive app installed.

At least that is the theory. A complicatedly formatted documented doesn’t open very well on an iOS device and during testing files created on my Mac or iOS device saved to the SkyDrive took a long time to appear online if at all. Using iCloud it is almost instant.

However, unlike iCloud, SkyDrive offers a very usable version of Word, Excel and Powerpoint via a web browser. So if you wanted to edit that afore mentioned resume in a Qantas lounge you are in luck. This service is 100% free and can be used even if you don’t subscribe to the Office 365 way of doing things. As an alternative to Google Docs skydrive.com is a winner!

So what does all this mean?

It is clear – at least to me – that the iCloud/Pages experience is far smoother, far more integrated, cheaper and faster than the SkyDrive/Office scenario.

The Mac App Store purchase of Pages is seamless and the iCloud integration is all encompassing. iCloud is free and Pages only costs $20.99. Even if you add Keynote $20.99 and Numbers $20.99 into the mix that is still only $62.97 with no more to pay as long as you don’t want to update.  I have clients that still use Office 2008 with the latest operating system so for the same period of time the iWork Suite (Pages, Numbers, Keynote) still only costs $62.97. For the same time period Office 365 (at current pricing) a full stand alone version of Office will cost $720.00. And if you stop paying your subscription after those five years your $720.00 copy of Office will cease to function and will prevent you from Saving or creating any new documents.

As far as sharing and opening documents on an iDevice is concerned almost anything is better than SkyDrive. With Google Drive, DropBox, iCloud and SkyDrive installed on an iPad only SkyDrive prevents you from saving a native pages file to its hallowed grounds. (Converting your Pages document to Word or PDF works fine)

Further more it is worth noting that while Microsoft may be shy about releasing a fully compatible version of Word, Excel and Powerpoint for iOS folks like Documents to Go and QuickOffice HD are not and they work very well with DropBox and Google Drive.

Yes Pages can open and save in Word format but lets suppose that these products are even better at playing in the Office space and if thats your focus they are worth a look.

Conclusion, well for document sharing between your devices and other people I cannot really think of a better solution than DropBox. iCloud document storage is ridiculously simple and elegant but its still very Apple focused and you cannot easily share your iCloud space with others.

More than anything the worrying thing here is the direction Microsoft is going with their Office product. Gone are the days where the average family computer can buy and install Office on their Mac (or PC) and thats it! with no more to pay unless they want to upgrade. To illustrate this point just a little more here is a real world cost for a word processor for the next five years (assuming Apple don’t jump on this subscription band wagon)

As Word cannot be purchased as a sepparte product I am listing the only product available from Microsoft that includes a word processor.

Ironically the birth of OpenOffice in the 90’s by Oracle was because Microsoft were seen as having a strangle hold on the productivity suite and as such the prices were steep. Over the years Microsoft dropped prices and suddenly it was an affordable price especially for Mums and Dads wanting to equip their Mac or PC with the words most recognised productivity application. But now, at these prices and the with the distasteful concept of being locked in, I think Mums and Dads will likely move to Pages and if Apple start playing this subscription game its back to OpenOffice.

If you wan to use Office for the next few years it might be worth upgrading NOW to Office 2011 for Mac.

Permanent link to this article: https://macservicesact.com.au/cloud-storage-for-a-mac-user/