What just happened to iTunes? 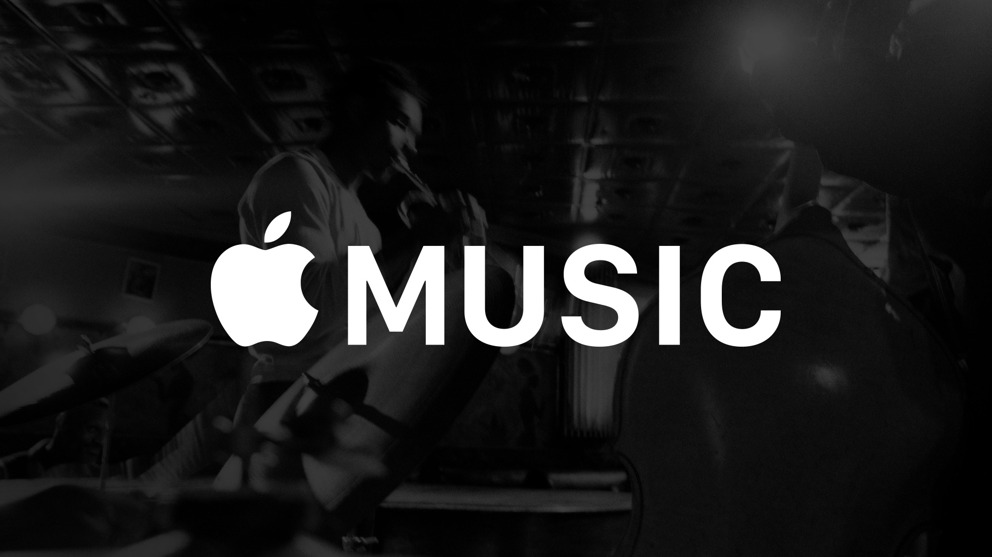 I have been working on this article for a while now and must have changed my mind a dozen times about how to write it because, the truth is, I am conflicted.

On one hand I can see what Apple Music is supposed to be, but on the other I find the new interface unwieldily and some of the features pointless, unless you are 15 years old.

But underneath the clutter and noise (of the visual kind that is), lies something special, something a little different that deserves some attention and is worth the small amount of effort it takes to make it work.

Ryan Nakashima writing for ABC said it best when he wrote… “Apple Music has Everything, perhaps too much”

In the beginning iTunes was a simple player for your music. In the days before we all knew who Kim Kardashian was people would rip tracks from a CD or purchase them from the iTunes, organise them into Playlists or albums, and then play them with the aid of the little white earphones that never seemed to fit in the ear properly. Life was simple.

Then something called “Streaming” entered the collective consciousness of digital music lovers and soon everyone was simply renting music via upstarts like Spotify and Pandora. Overnight it seemed no one was buying or stealing music anymore, but renting it from libraries of millions of songs. No longer were they limited to the capacity of their iPod or the thickness of their wallet.

So on the 9th June 2015 Apple announced Apple Music at the WWDC in San Francisco. Following an introduction from a music ‘giant’ that I have never heard of, Eddie Cue – Senior Vice President of Apple – attempted to explain it all with a serious of demonstrations from what I can only guess was his own private collection. (well, he seemed to enjoy the music he was playing at any rate)

Now I don’t want to say that the presentation missed its mark, but I think a physics class in Japanese would have been easier to follow and that is at the heart of the issue. It’s not what you get, its how it is presented that is likely to leave you reaching for a stiff drink and wishing for things the way they used to be, before we knew who Kim Kardashian was.

But don’t worry, I am hoping to make sense of that later. For now,  let’s look at what you get rather than the schizophrenic wrapper it comes in.

In a nutshell the new Apple Music gives you access to every tune (well the vast majority anyway) in its 30 million plus library for a mere $11.99 a month. With this seemingly endless choice you can create your own “stations” that will play a certain kind of artist or genre until the sun runs cold or The Simpsons is cancelled (whichever comes first). You can create playlists that contain your own songs (the ones you purchased the old fashioned way) plus the new songs you now have access to and they will all play together happily. The line between what is yours and theirs is blurred and the only decision you need to make is whether or not to enjoy it.

When you create a station in  Spotify or Pandora the choice of songs delievred is determined by a complex logarithm (if user A like singer B then singer C will also appeal) and for the most part this computerised version of Casey Kasem is pretty on the money. Apple music on the other hand uses flesh and blood humans (wetware as apposed to software if you like) to make these choices, thus giving the whole thing a human quality. Whether or not this works will come out in the wash but it is a clear sign that Apple want to do this right and differently.

Most streaming music services call their streaming content “radio” when in fact it isn’t.

Apple’s Beats1 radio service is the real thing; an actual person sitting behind an actual mic spinning actual records (well not actual vinyl, but you know what I mean)

The service is on 24 hours and is beamed from London, New York and LA.

But trust me on this, you will not want to listen to it (unless you are reading this with your cap on backwards and the crotch of your pants is parallel with your knees) Now before I go on, let me say right out of the box that I don’t consider myself  a Fuddy-duddy. I can listen to Rob Zombie and Eminem as easily as I can listen to Coldplay, Sting or Abba but the stuff coming out of Beats1 is, well, lets just say, not to my taste.

If you have ever listened to JJJ you might have some idea of what I am getting at but even JJJ has enough good stuff to appeal to someone who has been known to sing along to Nana Mouskouri.

If you care what Taylor Swift is doing with her afternoon or which city Justin Bieber is currently polluting with his particular brand of crap, then the Connect function is what you’ve been waiting for. Personally I couldn’t care less what they are doing and I know for sure they don’t care what I think unless I own a record company (which I don’t ) so I will say no more.

How to make sense of it all

The first thing you need to do is sign up for the three month trial and once you’ve signed on the dotted line you’ll be asked to choose artists and genres that most appeal to you and these will be used later to create song and album suggestions for you personally. 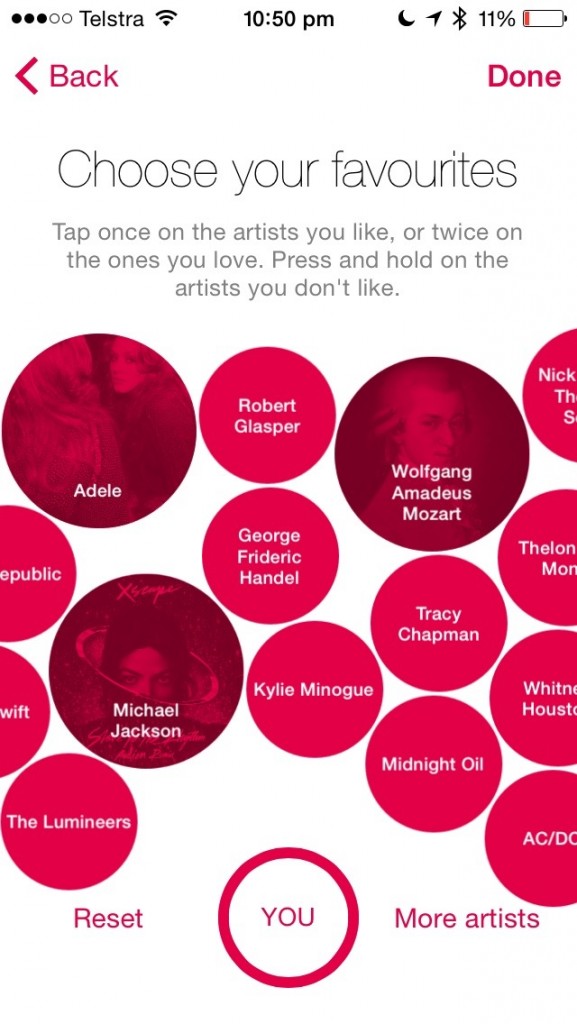 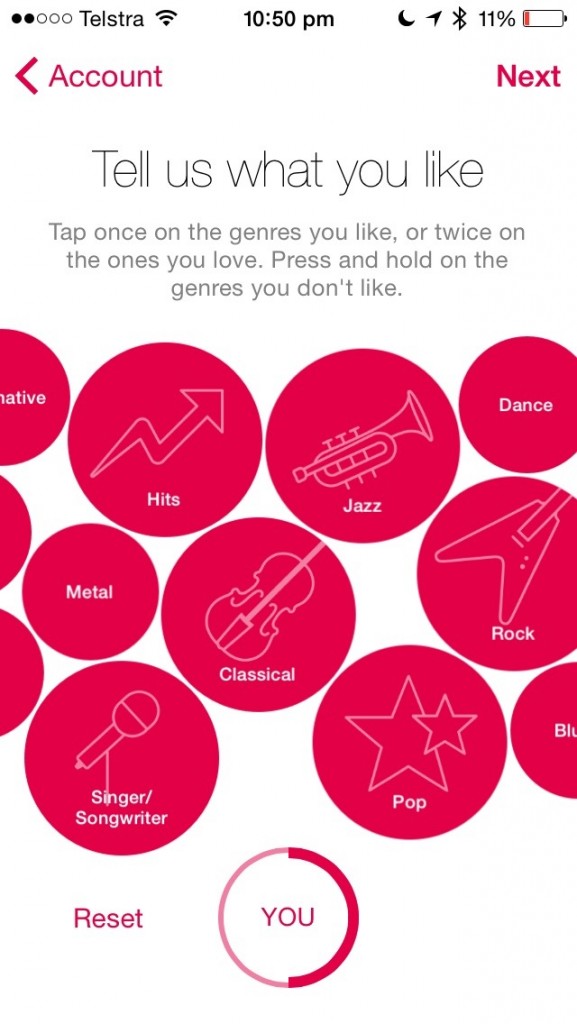 Then you are dumped into the mishmash of artists, banners, groups, song titles and the seemingly senseless icons that will, at first, have you biting your nails and wondering where all your music went to.

Forget the panels and the albums covers for now and look to the bottom of the screen.

Now unless you have a particular pension for telling artists what you think or  mulling over what they had for breakfast, you might find that ridding yourself of the “@ connect” icon might go a long way to soothing your jangled nerves. Now, return to Apple Music and you’ll find that the Connect button has been replaced with Playllists button;  a familiar friend from the old days. Ok, so now lets look at the other buttons and trust me, it all starts to make sense.

The For You button shows suggestions based on the selections you made at the start. Tap on this and you can scroll until your thumbnail starts to bleed but it will just keep offering album after album and artist after artist based on the choices you made earlier. If you are looking to extend your musical horizons this might be a good place to start. 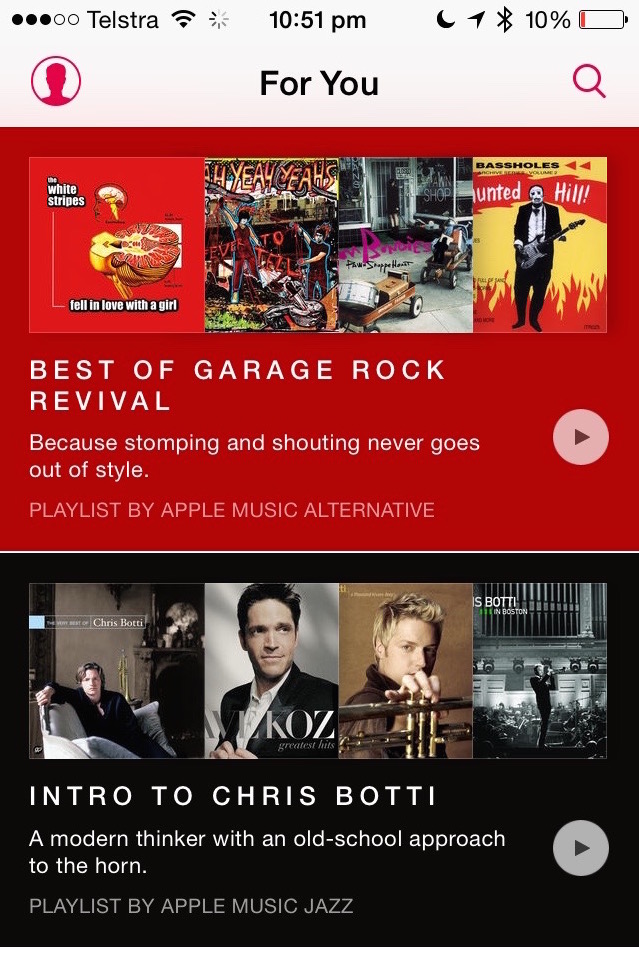 If you do find something intriguing,  tap on the Play button to listen to the whole album or tapping on the album itself reveals a little more including the tracks so you can pick and choose.

Each track and album have the  “…” button so you can do things like add the track to your own music collection where it will happily sit amongst the tracks that paid for a seat on your iPhone. 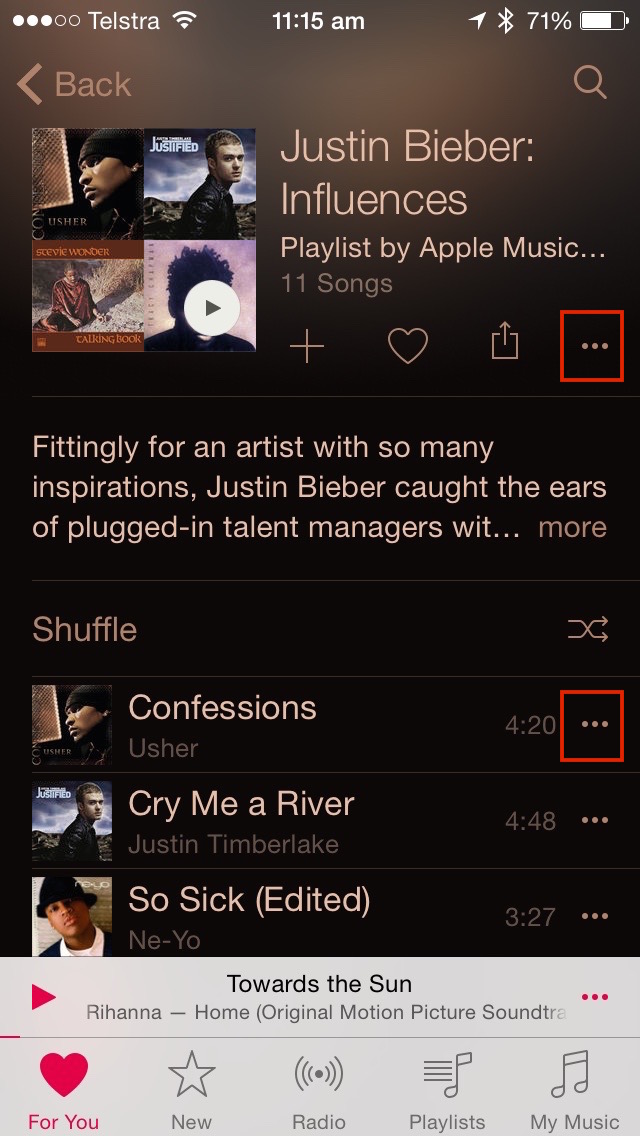 From here you can also create a Station that will use this song to play a continuous stream of tracks that fit into that particular genre. 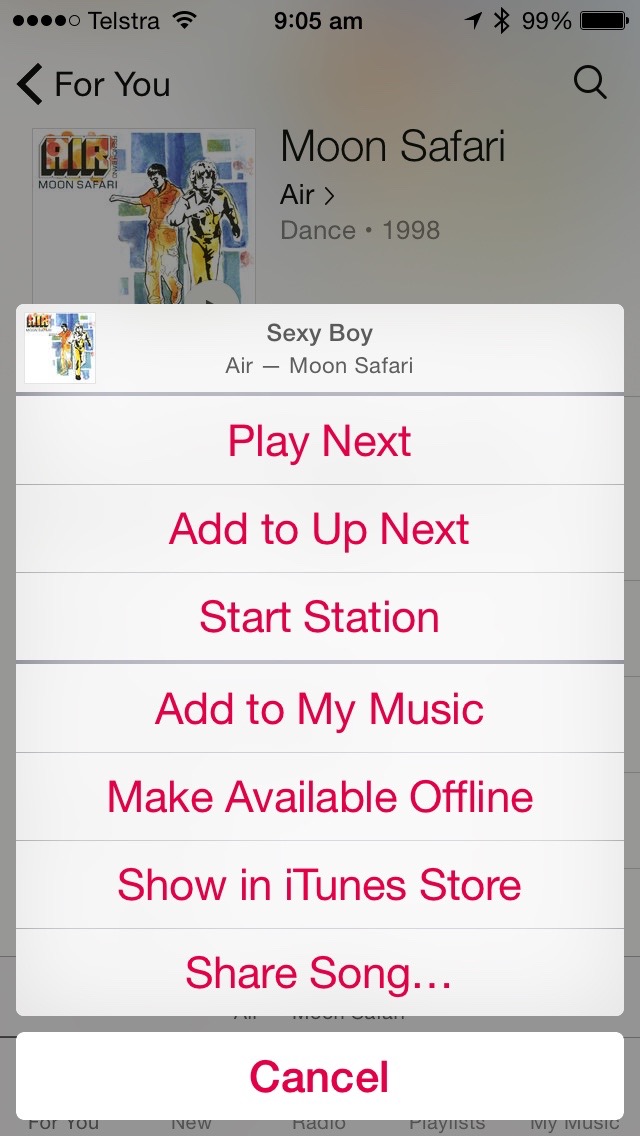 But as always, the discrete button in the top left hand corner of the screen gets you back where you started. 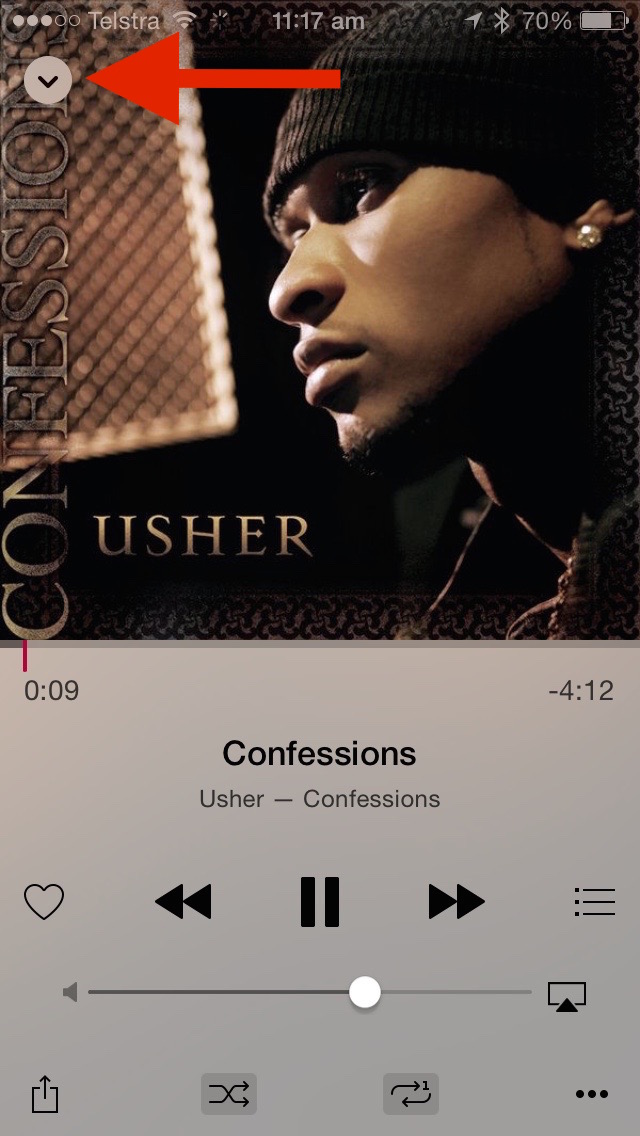 The My Music button is pretty self explanatory… it is your music. In the beginning this will be the only place you will feel safe because very little about this section is foreign. 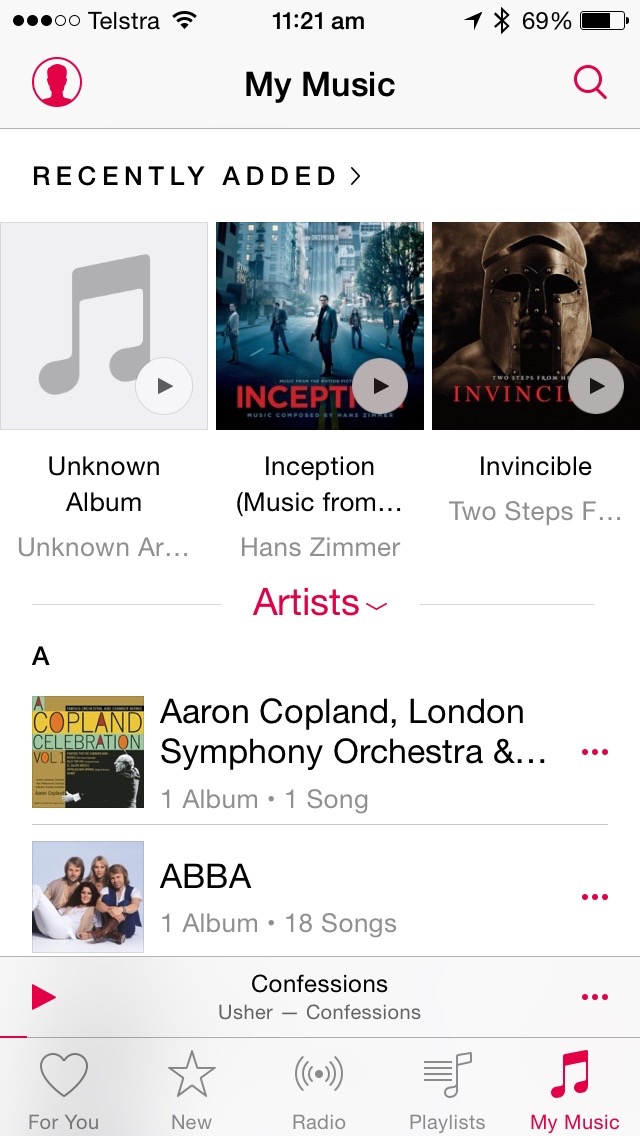 My Music is also just one of many places where you can do a search of both your library and Apple’s to listen to just about anything you want. 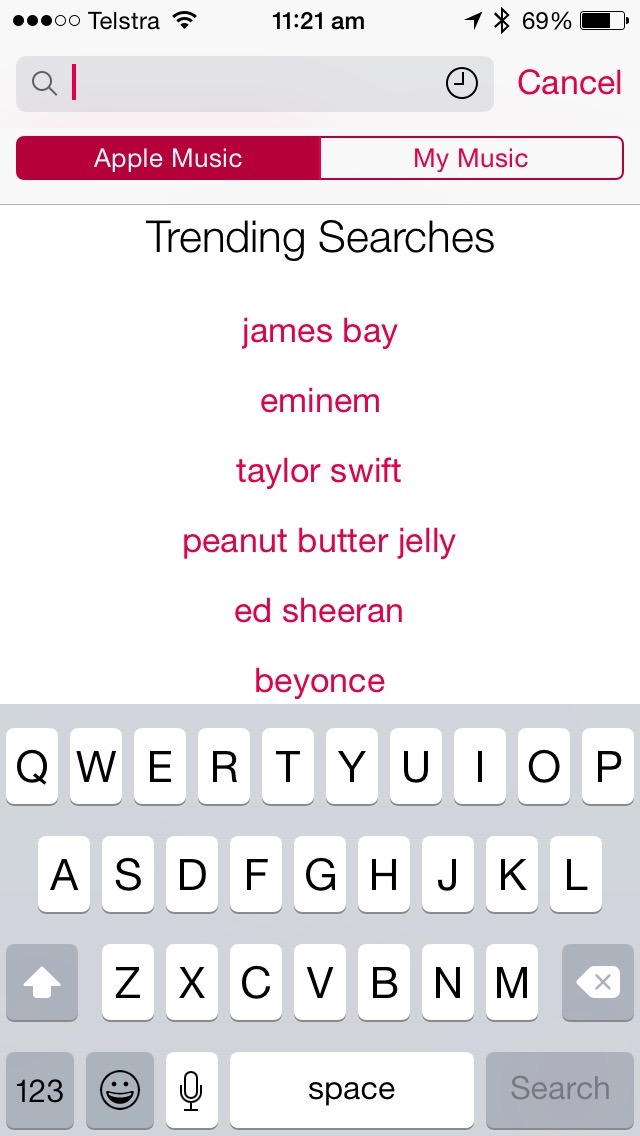 The Radio button takes you to the Beats1 Radio station. Tap on the Listen Now button to begin the noise and the STOP button to make it go away. 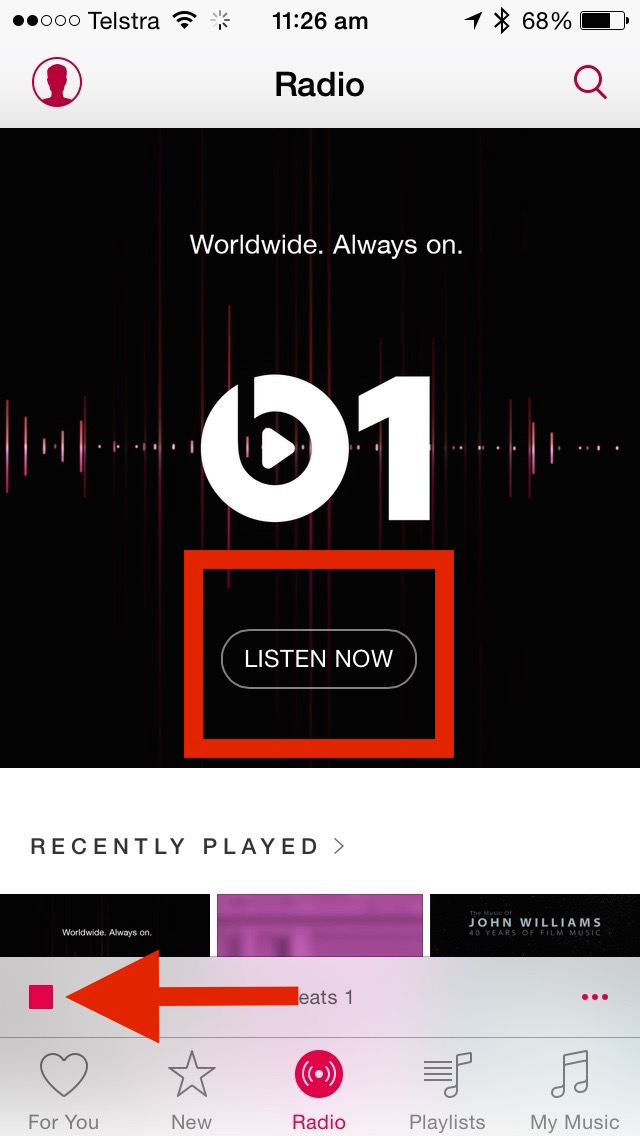 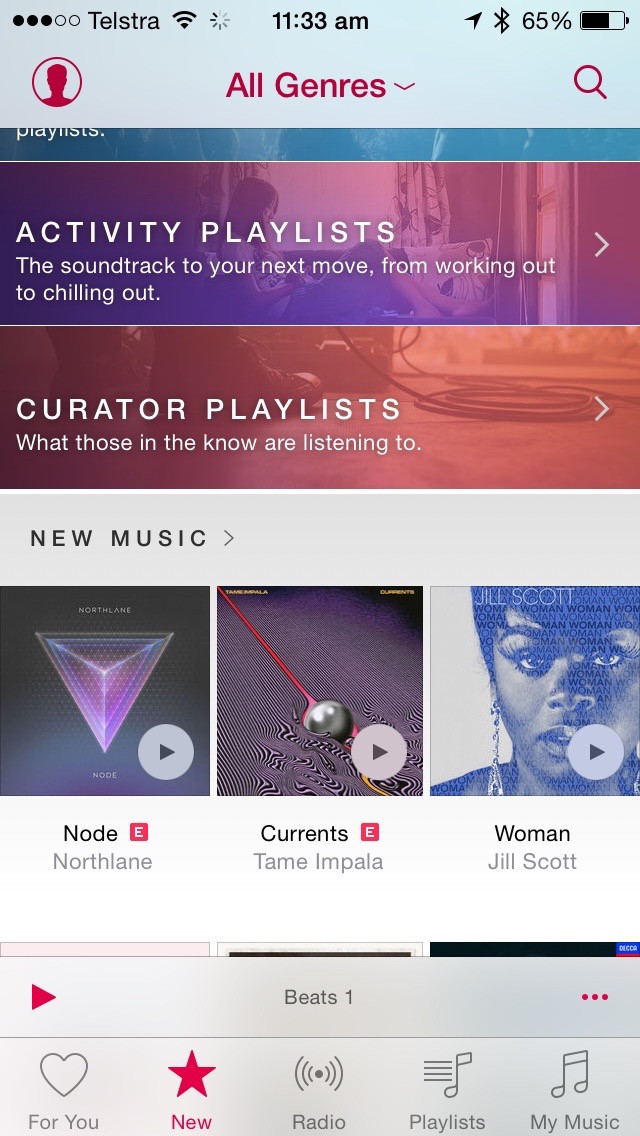 So how about a real world example of how this all might come together!

Lets say in a moment of madness you turn on the Beats1 radio and while you are stumbling for the off button you hear something you really like.

A each track is displayed at the bottom of the screen you can simply tap on the  …  button and add the track to your own music collection and listen to it later and into perpetuum.

But it gets better. Later that night dinner guests are arriving and you want to play some music but realise with horror that they have heard all your music before. 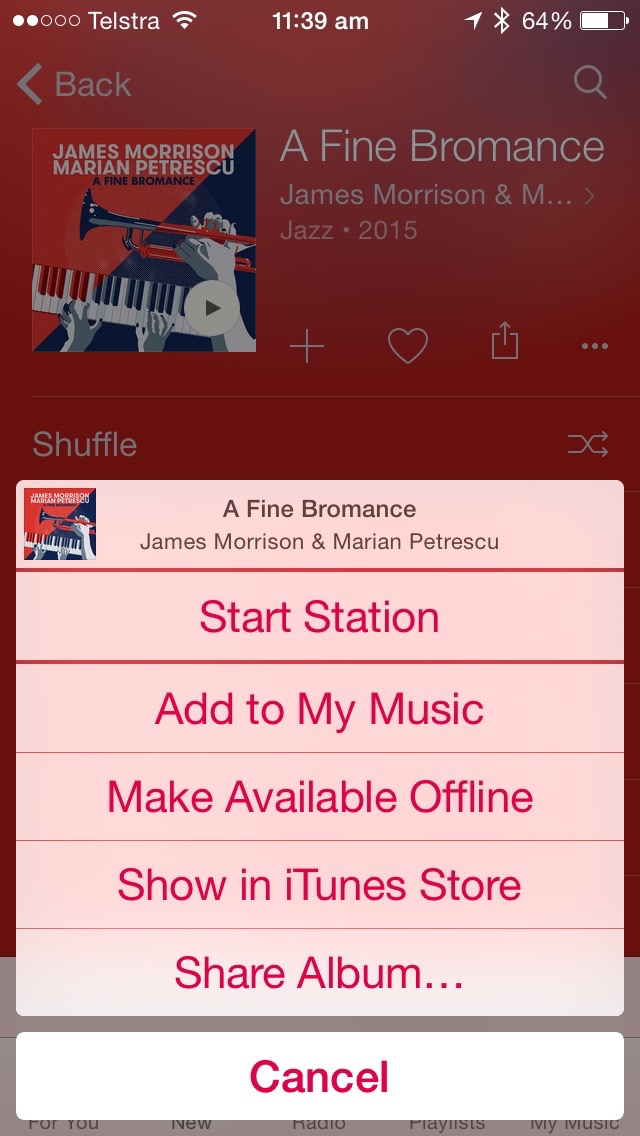 …you look for “Jazz” and create a “Station” that will play until the last of guests stagger out to their cab and well beyond while you clean up the kitchen.

Better still, if while having dinner a guest asks if you’ve heard the latest from Black Lab (you see, I am hip – or so my mum says…) Rather than saying no and letting the moment die, you can look it up and play the entire album. As always, of you if like what you hear, you can add Black Lab to your library, playlists, create a station or buy it the old fashioned way. 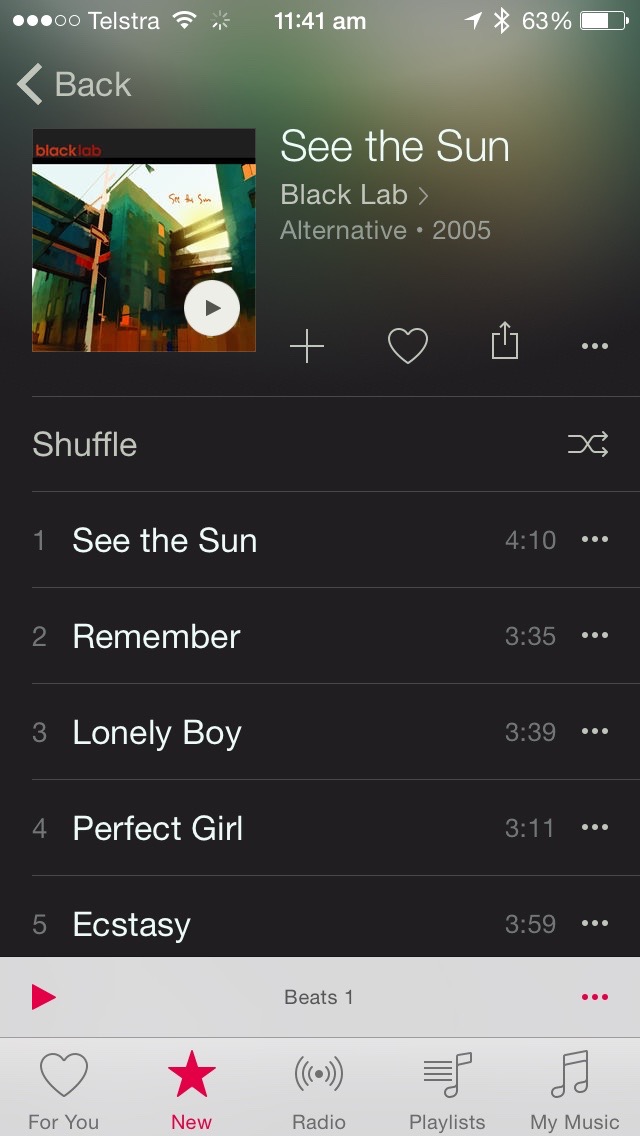 It took me a long time to warm to this new streaming service mainly because the interface seemed harder than the others. But once I figured out just what it was trying to do (and that it was doing a whole lot more than the others), I started to think this was the greatest thing since Bread.

Permanent link to this article: https://macservicesact.com.au/what-just-happened-to-itunes/