The New iPad (aka niPad) 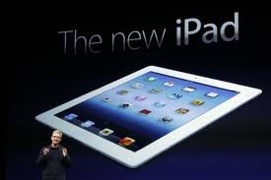 The iPad 3 has arrived except its not called the iPad 3 but rather the New iPad.

So now that that it has finally been released what is it all about and is it worth upgrading?

Once upon a time things like a new Apple product were never reported outside of blogs like this or Apple Fan pages like MacNews or MacWorld. But these days such an event makes the National News (which is rather embarrassing for all concerned apart from Apple Shareholders I guess) So by the time you read this you will have heard all about the new – amazing screen, the faster processor and the better camera. You would have also heard that the look and feel of the iPad is identical to the iPad2 and you would have been told that it does 4G (which means very little in Australia at the moment) and that it is slightly cheaper than the iPad2 was when it was released a year ago.

But just in case you haven’t heard all of these things allow me to fill you. (if you have skip to this bit and read on further)

When the iPhone 4 came out it had – among other things – something called a Retina display. So many pixels were in this screen (so Steve said) that the human eye couldn’t actually make out them out individually. When I heard this I shrugged and condensed this to mean that the screen was brighter and a little clearer. It wasn’t until I got my own iPhone 4S and compared it to the iPhone 3GS that I had moments before but back into its box that I realised just how wrong I was. The screen was not only brighter and clearer it was also an actual joy to use. The screen was so clear and so dense with pixel goodness that it seemed unreal, more like a printed page than a computer screen. This made using the phone, looking at video and playing game so much more natural and immersive than before. This is the same screen (only much bigger) that is now housed in the new iPad.

The new camera in the New iPad (I think form here on I will refer to it as the niPad) is much better in that it is 5MP and has all kinds of processing power that will drag every morsel of light from an image. Curiously though they still haven’t given it a flash and when I asked someone about this they speculated that this was because Apple don’t see this as a camera that people will use for important pictures. Apple believe that people will use a proper point and shoot or their iPhone for those kinds of shots. Well OK I guess and this is certainly true in my case but still….. it wouldn’t have hurt! Perhaps this will be a feature of the New iPad2?

Processor power is very boring so I wont bang on about that. Suffice to say everything you do from opening applications to playing games to zooming in and out of photos will be faster.

Curiously Apple have decided to leave Siri out of this iPad, something that most people felt sure would be a flagship offering. After all, if it was good enough to offer in the iPhone 4S in October – as beta – surely it was worth including in the niPad in March? I suppose its possible that they might offer this as a software update in the future if indeed the elements that run the included voice dictation are enough to power it. the Voice dictation built in looks very Siri like and is certainly welcomed but its hardly new and can actually be achieved already with the iPad2.

So is it worth upgrading from the iPad2 or indeed is it worth buying instead of an iPad2 (which is still on sale) from the original iPad?

Well that is a nutty question and one that I don’t think I can categorically advise on.

I think – in the end – it really depends on what you want to do with your iPad. To my mind all iPads are worth considering depending on your needs, even the first iPad, and the only stipulation I make is always get the 3G version. The wi-fi only version, like an a two seater car, is always limiting. I am writing this on an original iPad with a bluetooth Apple keyboard and its running the latest iOS and it does everything I need it to do, apart from connect to the internet away from a wi-fi network. I regretted the decision to buy the original wi-fi only iPad almost immediately and so I am in the market for a new one – as it happens.

But to be honest my sights aren’t set on the niPad but rather on an iPad2; same function but cheaper price. Its true the screen wont be as good and no I won’t be able to shoot HD video but I don’t want to and I never will and I am limited to 16gb but none of these are an issue for me personally. And as for voice dictation, well I can do that now with the free Dictation app from Nuance. In fact I m doing it right now.

Permanent link to this article: https://macservicesact.com.au/the-new-ipad-aka-nipad/