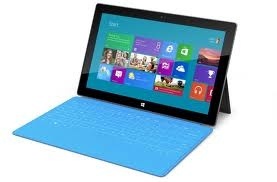 It has taken them over two years to enter the space dominated by Apple and a few sniveling runts gorging themselves on the scraps left behind but on the 18th of June Microsoft finally announced a tablet.

The device itself looks a little dated with the profile of a Dell Inspiron and some stolen technology like a MagSafe charging dock – invented by Apple – and a magnetically connected cover also invented by Apple. Although it must be acknowledged that the cover doubling as a keyboard is kind of cute and is a little more inspired than the keyboard dock announced by Apple back in 2010. But again that was 28 months ago and it seems that the concept of a keyboard for a tablet device is not all that popular anyway. Bill Gates has recently been reported as saying that children cannot learn without a keyboard. I guess he has never used an iPad or seen the countless thousands of children already learning rather a lot on their iPad- thank you.

Looking at the launch I cannot help but think that Microsoft have again missed the boat and the point. It’s early days for sure but the excitement of Mondays launch is already digital newspaper wrapping digital fish and chips. I get the impression that no one really cares and this is supported somewhat by a recent survey that indicated that 4 out of 5 people aren’t considering the Surface at all. At all!? But like I keep saying, it’s very early days.

There is no getting away from the fact that this whole thing is just an echo of the iPad launch and it offers nothing that isn’t already out there. The whole launch was how about they had re-imagined the tablet and how intimate and natural it felt to interact with the web in this way. If that sounds familiar it is because Steve Jobs said it back in 2010. The launches were so similar it lead someone to create this comparison video. About the only thing different between the two launches was the iPad’s browser worked.

The only draw card the Surface has is the Metro or Windows 8 interface and even that seems to have its problems. The precursor, Windows Phone 7, has made about as much industry noise as a mouse burping in the great hall of West Minister Abbey and early testing seems to indicate people will resist this approach to computing on their workstation. If this is true it’s a shame because if Metro is good for anything at all it’s good for tablets and smart phones but no one wants to use Metro on their mobile device and considering Windows 8 is similar to Windows 7 look and feel this trend is likely to continue. Apple’s iOS interface, whether it be on their own devices or the knock version found on the hemorrhoid – sorry Android, holds around 90% of the worlds smart phone users so it seems that approach is the one people actually want.

So where does this leave the Surface? Its hardware is nothing special, its features are over two years old and it has an interface that very few people actually seem to care about.

Of course there is one ace up the Surface’s sleeve and that is Office because like it or hate it, Office is the default office productivity suite in the computer world.
Well, at least I think it is? It certainly used to be but considering there are 55 million iPads out there that seem to be doing very well without it I am left wondering if it really is that important to the tablet user?
There is a rumor that Office may be released for the iPad in November and if true this would be yet another reason not to buy the Surface, so you’d have to wonder at the sanity Microsoft doing that. Then again, considering iPad’s market share Microsoft might very well sell more copies of Office for the iPad than they will for the Surface.

This device is late and not very inspiring. The form factor, concept and meaning was released (in computer terms) a life ago. The surface is an in-house project, meaning they are locking out all their old business partners so thats going to piss a lot of people off and all for a device that could tank like the Zune. I have to wonder if it’s worth it’s and on the Surface I would have to say no.

Permanent link to this article: https://macservicesact.com.au/microsoft-surface/