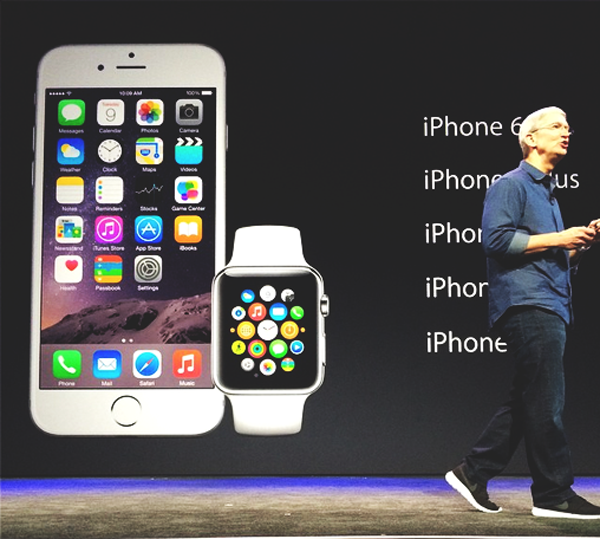 When the iPad was released in 2010 Steve claimed that the 9 inch form factor was “the optimum size”. History has proved him wrong with the iPad Mini being favored by most of today’s iPad buyers and while I cannot claim to have insider knowledge surrounding the decision to give the original iPhone a 4 inch screen I suspect it was because Apple were determined that the iPhone could be used with one hand.

Samsung, devoid of any original ideas, copied the iPhone without any shame and didn’t even have the decency to improve on the concept. In fact- with help from Android – they only succeeded in cheapening the model and the interface and the court case and subsequent the resulting billion dollar fine seemed to confirm this.
One thing Samsung did do was popularized the larger screen phone. I am not talking about the Phablet, but the 4.8 inch screen introduced by the Galaxy S – the first Android phone to sell well. From that moment on it was clear that “some” people preferred a larger screen and yet Apple resisted coming out with the iPhone 5 and the iPhone 5S with taller screens but not wider screens.
So why would the people who pioneered the iPhone not produce a larger screen phone because it wouldn’t have be hard to do? The simple answer is the one they came out with during the iPhone 5s launch – that they were committed to the idea of using the a phone with one hand hadn’t yet fingered out how to make a large phone work this way.
Being totally devoid of any innovative abilities Samsung had simply made the phone bigger without figuring out (or caring presumably) about the user experience. Smart watches that actually do very little and what little they do do isn’t done very well. Phones that have an interface that looks like it was copied from an iPhone by someone wearing boxing gloves and TVs that have 101 features – none of which work well or is anything anyone wants. But at least they can say the features are there- regardless of how useless they are.

So, by now you’ll be wondering what has happened to Apple’s concept of using the phone with one hand now that they have released the iPhone 6 (4.7 inch screen) and the iPhone 6 Plus (5.5 inch screen)?
Well with all the improved design, the new body shape, the improved battery life and the improved camera the ace in the hole turns out to be a new gesture called “reachabilty”. The simple gesture of lightly pressing twice on the home button moves the whole screen down so you can, still with one hand, reach the top most icons and arrows.
I first saw this demonstrated at the keynote address and I must confess I didn’t think it was something I’d ever use and in any case Samsung already have a similar function and it doesn’t work. But in just 24 hours it has become common place- almost second nature and it seems, again, Apple have taken the time to make it actually work for the user.
Suddenly the convenience of looking at websites and emails with a larger screen doesn’t mean I always have to use two hands to use my phone. And the genius of this gesture is that it renders even the ridiculous iPhone 6 Plus simple to use with one hand.

Suddenly the new iPhones mean there really isn’t any need to but an Android because the only lead they ever had (larger screens) has been surpassed and in a spectacular way. Now you can have a phone that has a rock solid and consistent interface that is both secure and easy to use on a large screen.

The other jewel was the release of iOS 8 and while it’s not radically different from the iOS 7 in terms of looks, it has enough under the bonnet to warrant the upgrade.
For starters iOS 8 now supports extensions. This technology (a catch up from Andriod if I Aam honest) means that for the first time iOS now shares some of its core services with third party developers.
What the hell does that mean?
Instead of separate camera apps (as an example) that do things the built in camera app doesn’t do, these features just appear when you launch the camera app. In a similar way there are now lol kinds of keyboards available and password manager apps now work right inside Safari in the same way it does on the desktop.
Anyone who has tried those 1Password on an iPhone will be dancing in the street right about now.

Then there are the nifty little things like being able to reply to a text message without leaving the app you are in. Or being able to activate Siri by simply saying “hey siri”….. You don’t need to even touch the phone. The list goes on and on and a comprehensive list of all the features The can be found here.

With the combination of iOS 8 and the new phones the future seems bright again. No need (if in fact there was ever a need) to feel ashamed that your phone only came in one size.
This new found optimism is encapsulated- I think- by Steve Wozinak (cofounder of Apple) who has for a while now been an Android user. After the launch he announced he was “throwing away all his android phones”
I guess he was waiting for a larger screen as well.

Permanent link to this article: https://macservicesact.com.au/ios8-and-iphone6/