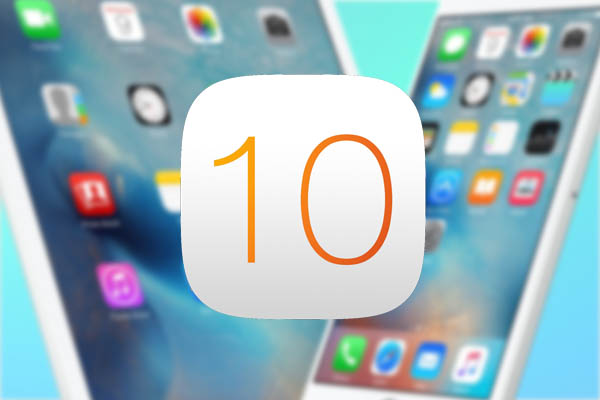 Last week we posted a warning about some nasty Malware for iOS that has been discovered in the wild. In the article we said that the best way to avoid that Malware was (and still is) to upgrade to 9.3.5. However, it is worth noting that iOS10 is also immune to this Malware and it has the virtue of being packed with dozens of new features.

On the 7th of Sept Apple will be announcing the iPhone 7 and the only thing certain about this new phone is that it will be coming pre-loaded with iOS10.

And while the iPhone itself is still a surprise (depending on the rumours you subscribe to) iOS10 is well known. Its features were laid bare for all to see back in June and the public beta has been available as a free download for a few months now. If you like the look of what is about to follow it might be fun to download it early and play with all the new features and remain immune to the Malware that is floating around.

But just before we go any further, let me say that while I can attest that it works with no ill affect on MY iPhone 6S (and all the apps I rely on), my daughter’s iPhone 5 and my wife’s iPhone SE the same cannot be said for the galaxy of apps you may have installed on your phone so be careful.

When you install iOS10 the first thing you’ll notice is that simply picking up the phone wakes it up, allowing you to see your notifications without needing to unlock the phone at all.

Incidentally, for all you secret squirrel types… this feature can be turned off.

The second thing you’ll notice is that the  SWIPE TO UNLOCK feature has been replaced with Press home to unlock. 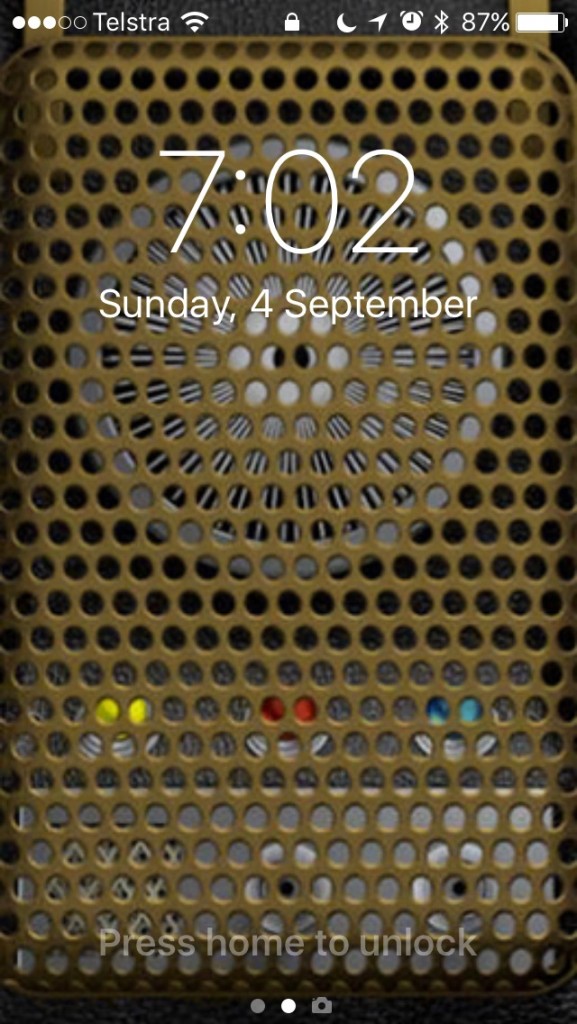 After so many years of swiping to unlock the phone this will take some getting used to and for the first couple of days (or in my case weeks) you’ll be spending a lot of time in the beautifully redesigned Notifications Centre which is now accessible by swiping to the right… but more about that later. And while we are here, you might also notice that if you swipe to the left you get instant access to the camera.

For those with Touch ID installed,  touching the Home button will unlock the phone almost instantly and for others you’ll be invited to enter your code.

When you think about it, it makes sense because most people pressed the home button anyway and then swiped to the right and then entered their code.

Once unlocked and inside the phone all looks familiar and untouched.

Swipe down from the top of the screen and you’ll be dropped into the new Notifications Centre. Bold, pleasantly individual, ‘cards’ of information show you everything that is important to you. The weather, your battery status, your next appointment and so on are listed and, with a tap, actionable to obtain more detail.

Scroll all the way to the bottom and you’ll see that you can edit this list so it reflects only what you want to see and what is important. 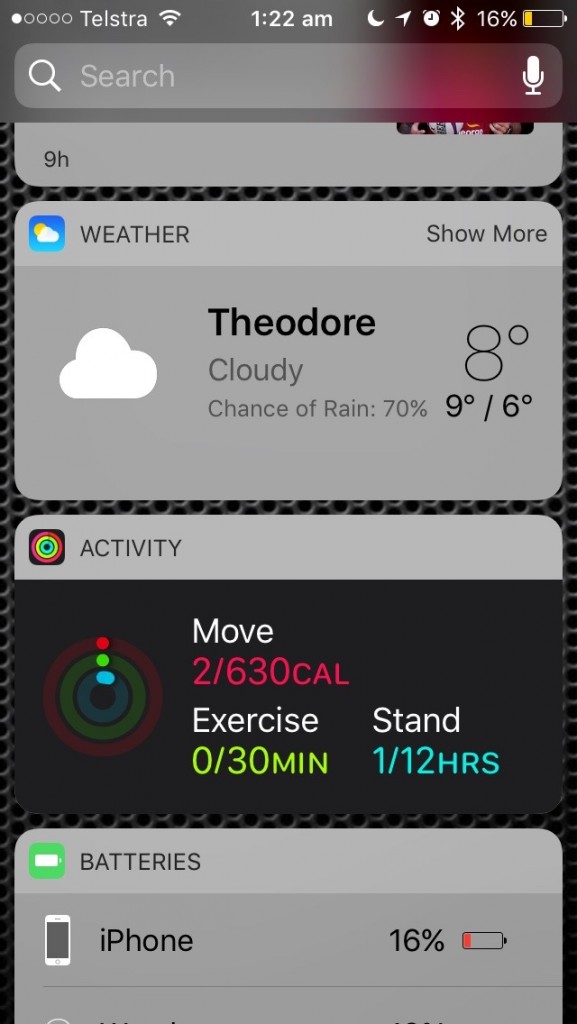 Next the Contacts app has received some attention and it was here that I first got the feeling that the cold austerity of IOS7 has now been replaced with a more graphical approach without resorting to the Skeuomorphic tendencies of the past.

Instead of thinly drawn icons or just text labels to denote a feature, each action now has a very definite button and space of its own. 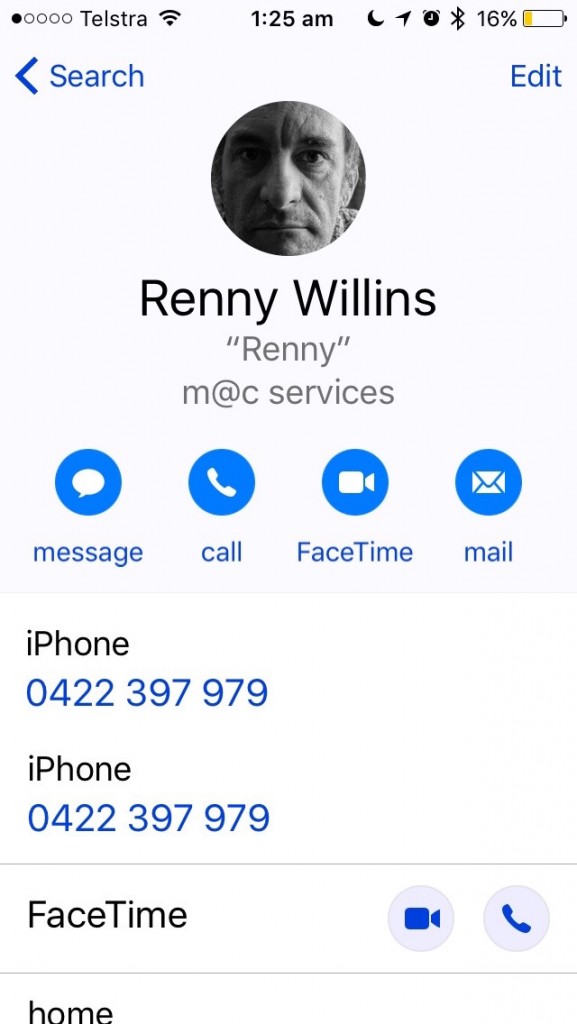 Making the most of Forced Touch

Back to the home screen and for those with force touch installed (iPhone 6, 6S, 6 Plus) pressing hard on various icons gives you far more information and access to features than ever before. Pressing firmly on the  Settings app for example gives you quick access to your Bluetooth, WIFI and Battery Settings. 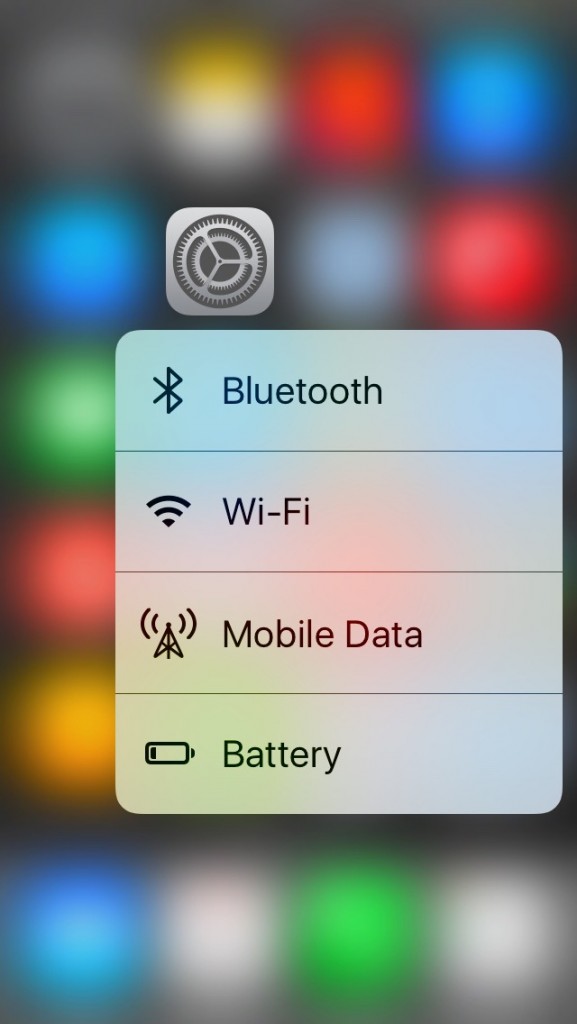 Pressing firmly on the Mail icon gives you quick access to creating a New message, your recent recipients or access to your Inbox. 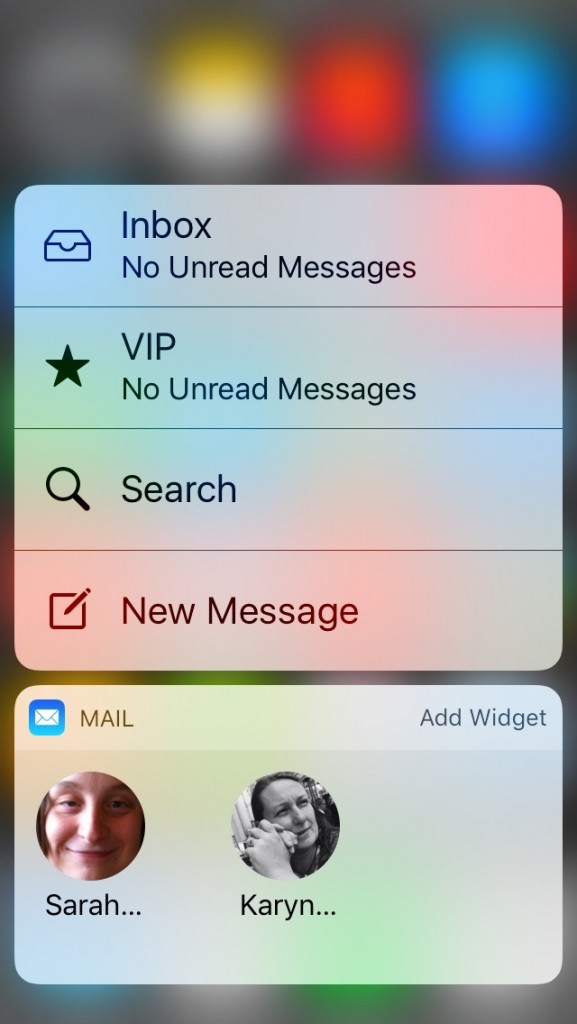 Using this feature you can now have the torch (sorry but I refuse to refer to it as a flash light) illuminate in Low, Medium or Bright light… 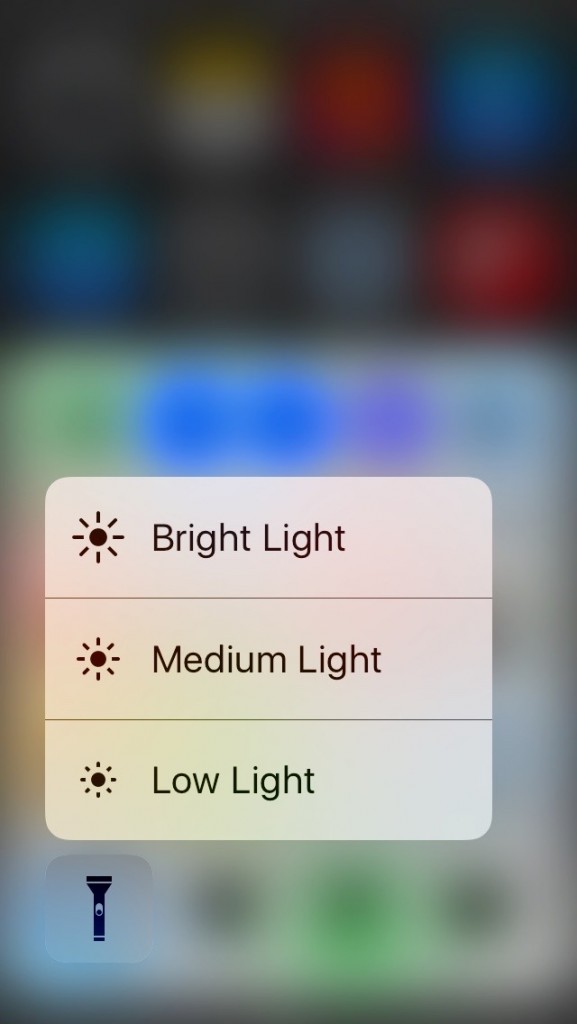 … and on the Camera app you can quickly take a selfie or record a video. 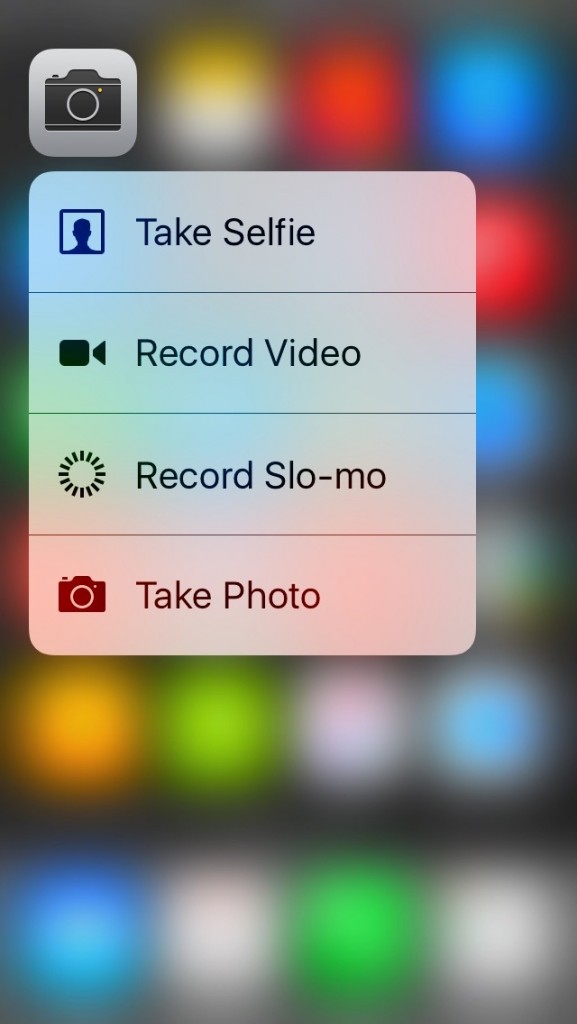 Without any doubt it is texting (you know, that thing that has replaced talking to one another or sending long emails or God forbid a letter) that has received the lion’s share of features this time around. But it is anything but obvious, in fact if you wanted to ignore all the new features in the Messages app then the only thing you’d be forced to acknowledge is that the SEND button is now an arrow pointing skyward. You’d also be forced to ignore the three new icons that sit to the left of the text field but even then these dissolves into a grey arrow once you start typing. But the  fun hidden behind these little representations is surprisingly engaging. 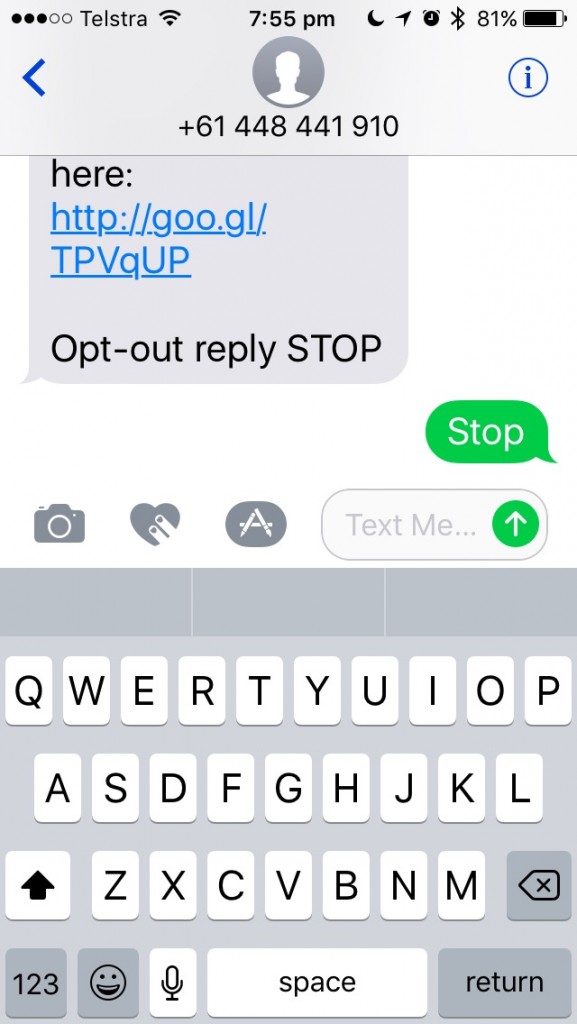 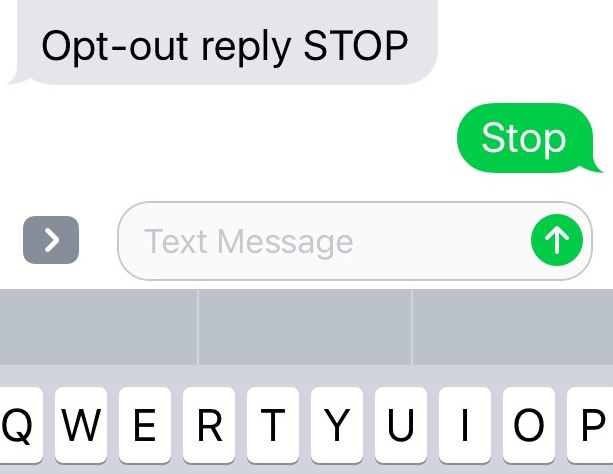 The new icons to the left give you quick access to your camera and that is nothing new really, however the icon that looks like a heart with two fingers resting on it allows you to send gestures – ala Apple Watch – from your phone.

It is about now you start to realise this iMessage thing has become a lot more fun and a heap more expressive.

On the left you can hand draw things (I am afraid I am limited to flowers) or you can draw on a selfie and send that. 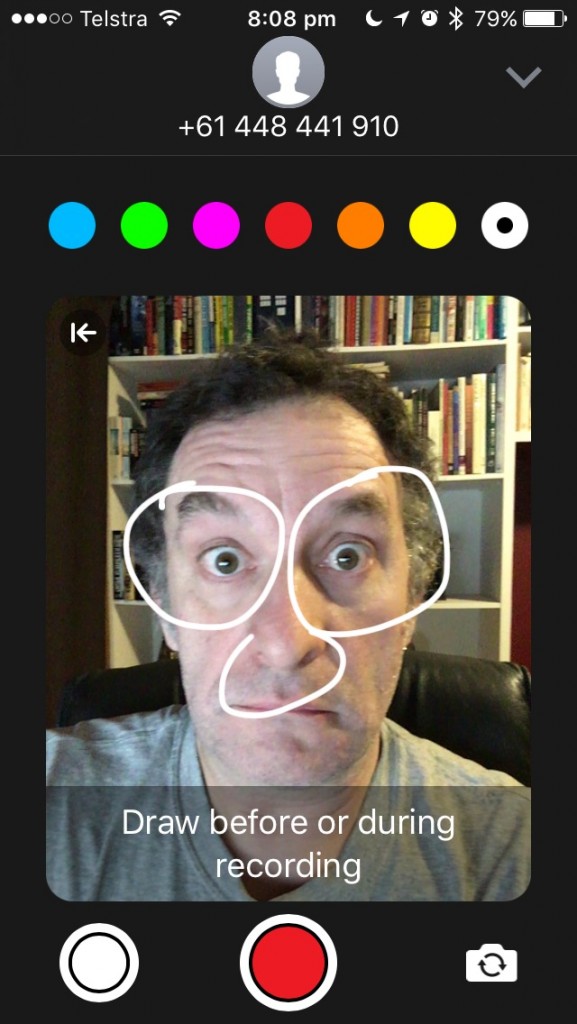 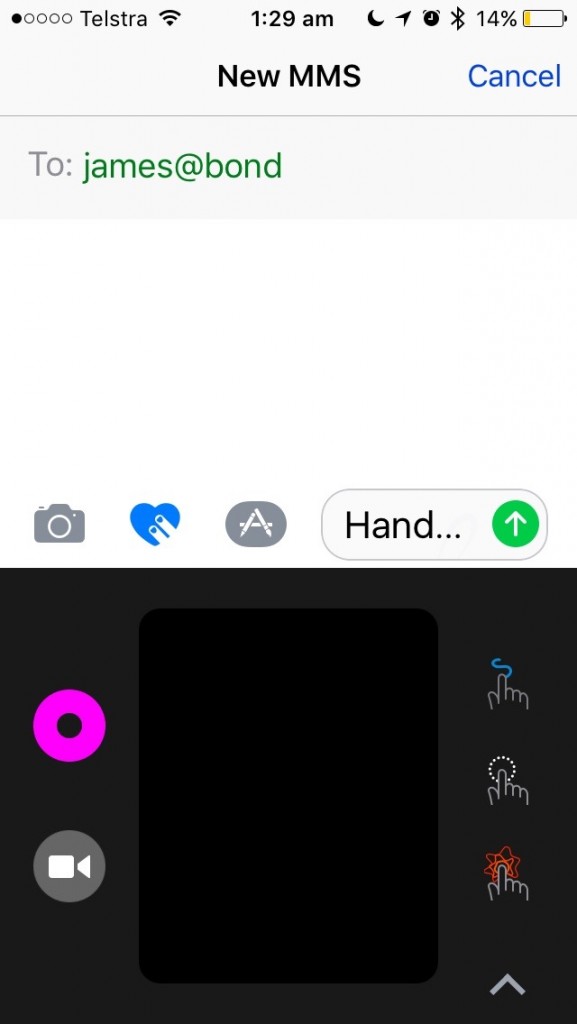 On the right you can send kisses, heart beats, broken hearts provided you posses more dexterity than I have. 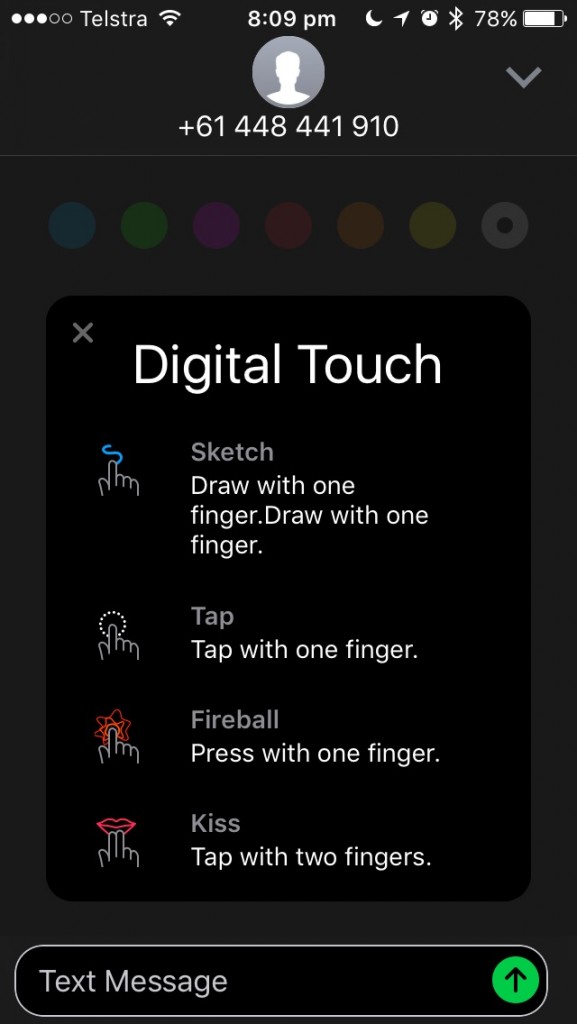 The App store icon gives you access to pre-loaded GIF files as well as other downloadable applets that give you even more ways to enhance the modest text. 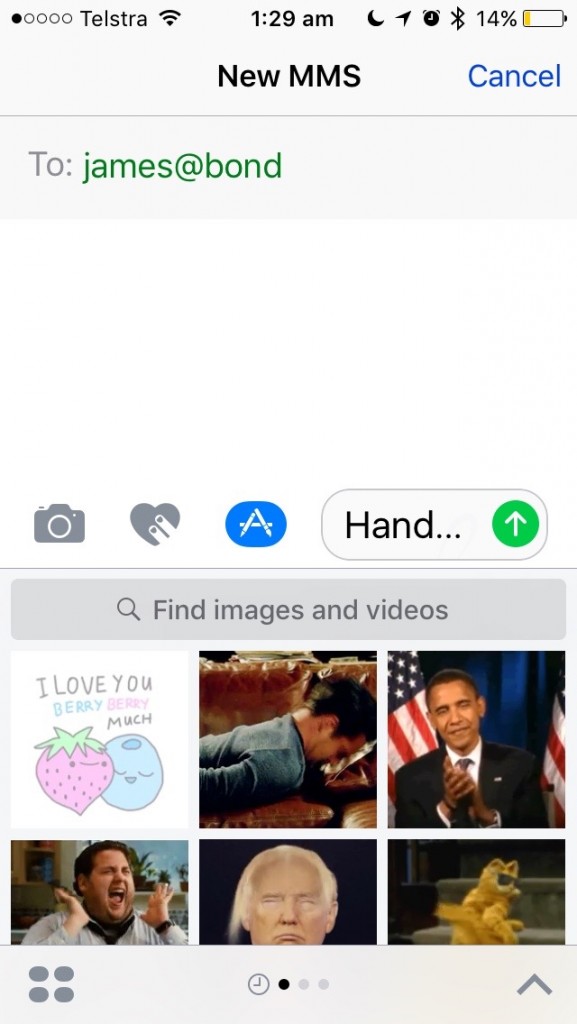 Now, if you recall that little arrow, the one you use to send a text, if you tap and hold on that arrow you get even more in the form of Screen and Bubble effects.

Type your message, press and hold the arrow and you get this menu: 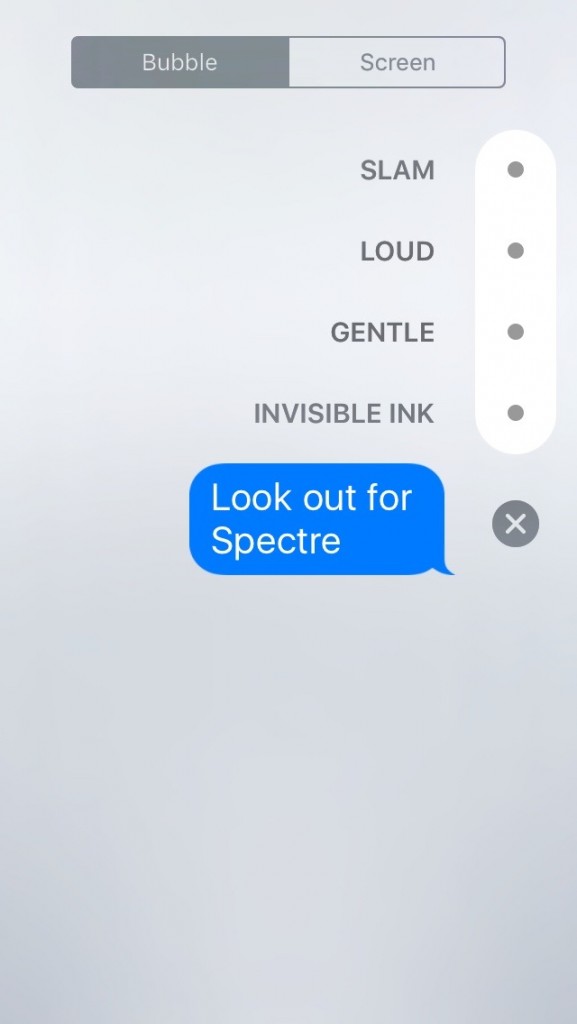 Choosing Slam will see the message delivered with an effect that is hard to describe but let us just say it is dramatic. Loud gives the bubble a shaking, alarm clock kind of effect and Gentle does precisely as the name suggests… the message arrives with a small type face and grows gently to full size. For the first time, the word “sorry” can be delivered via a text message with the emotional content it deserves. And finally, Invisible Ink sends the message (or picture) masked in a glittery haze that must be swept away to reveal the message.

Then of course there are Screen effects. Sending your text with these will have it arrive with a full screen of balloons, lasers, fireworks or confetti. 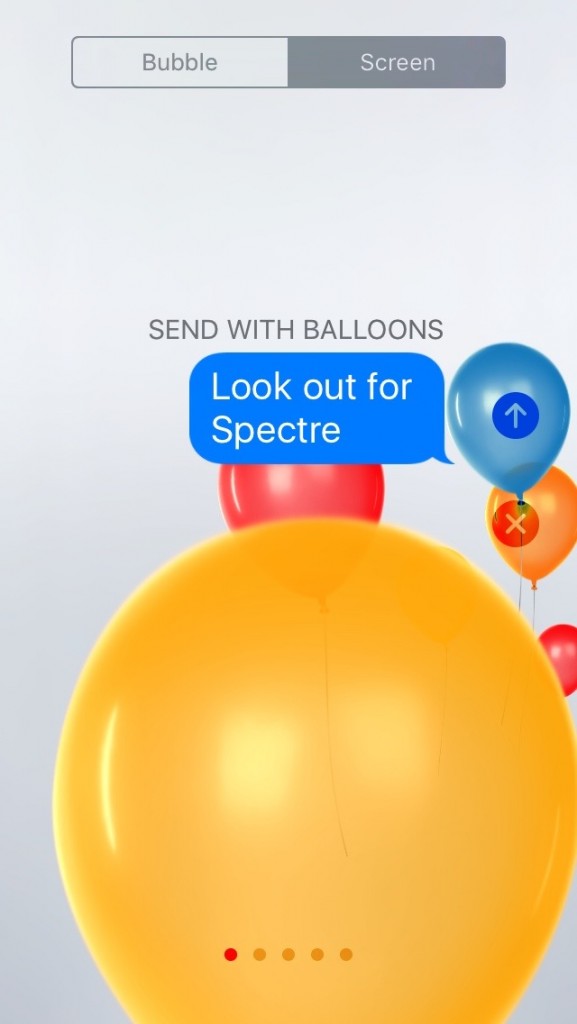 Lastly, still in iMessage, you can hand write a message using your finger as a stylus. 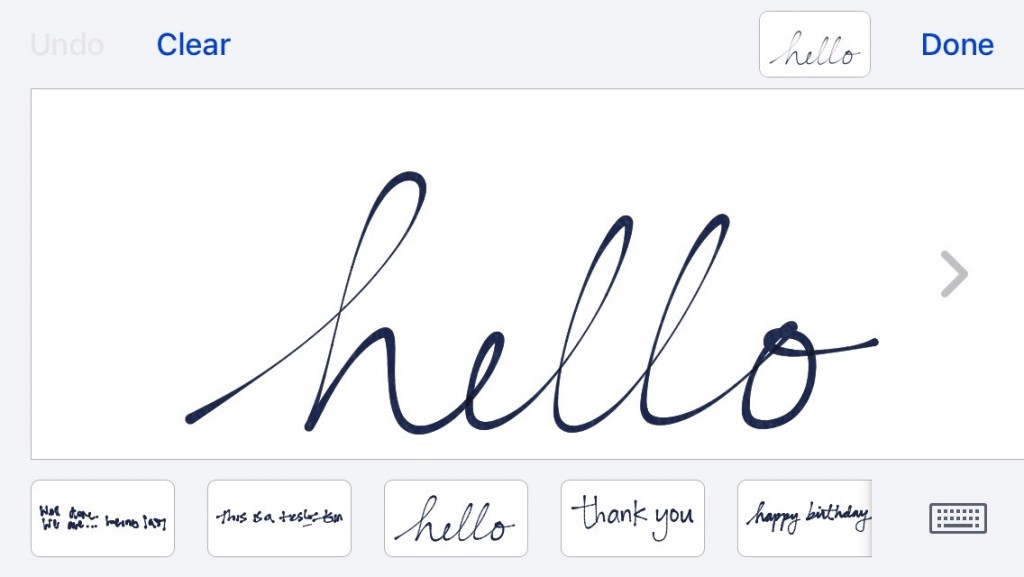 Trying to remember that the iPhone is actually a phone, it would be remiss of me not to tell you that now when a call comes in the iPhone will do its level best to try and guess if this unrecognised number is in fact a telemarketing call or at the very least what part of the country it comes from.

In Notes not only can you lock a note away from prying eyes, you can now share a note via iCloud. This really is useful if you are sharing a project and need to keep tabs on who is doing what and when. 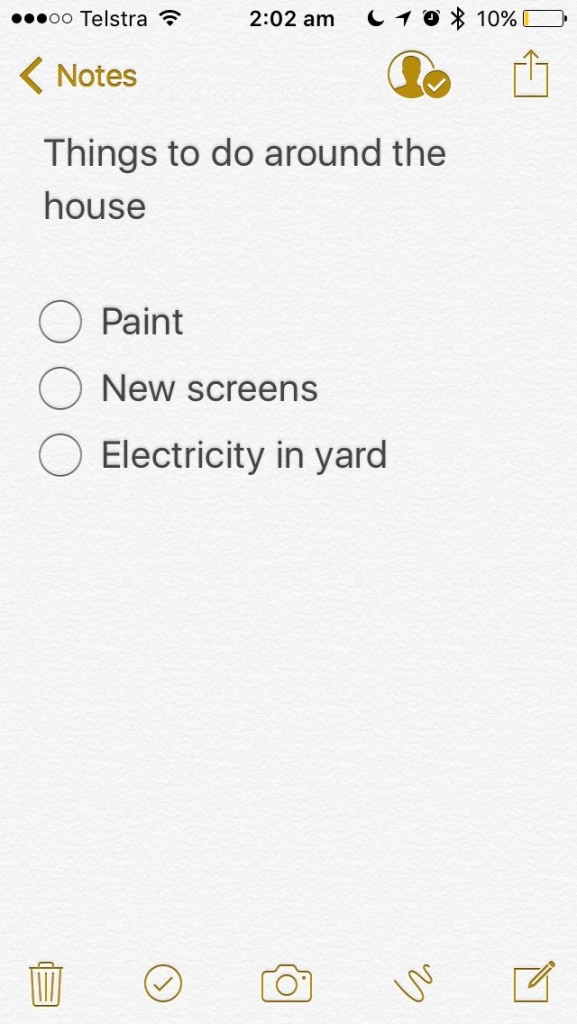 The photos app has been given some serious smarts this time around and they make the mobile photo machine a joy to use.

To begin with, upon its first launch, your library is put through a filter that allows the iPhone to present your photos in new and exciting ways. It will, for example, bring up automatic albums like Memories or Your trips last year or Your Dog, all based on what kind of photo and when and were it was taken. 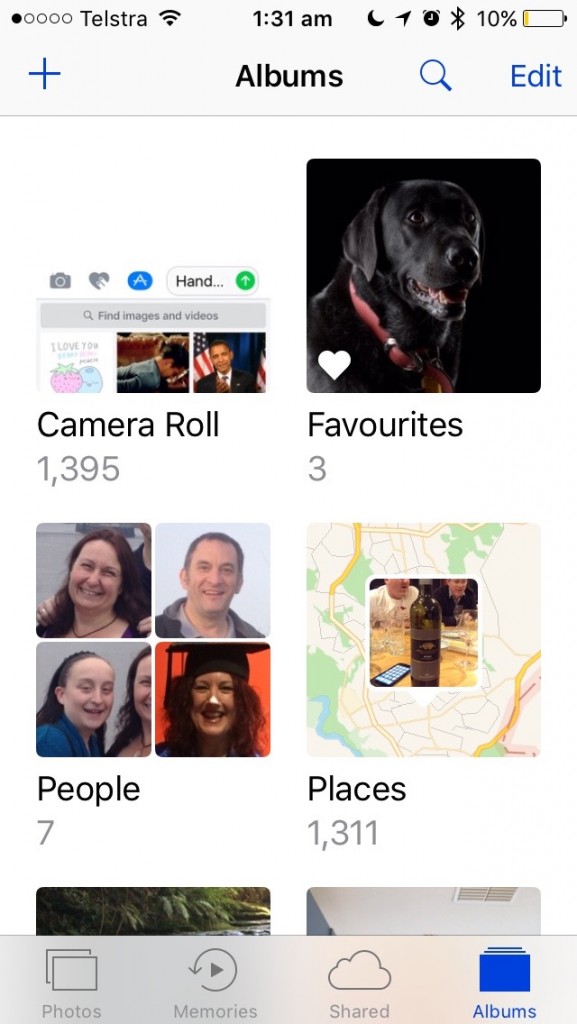 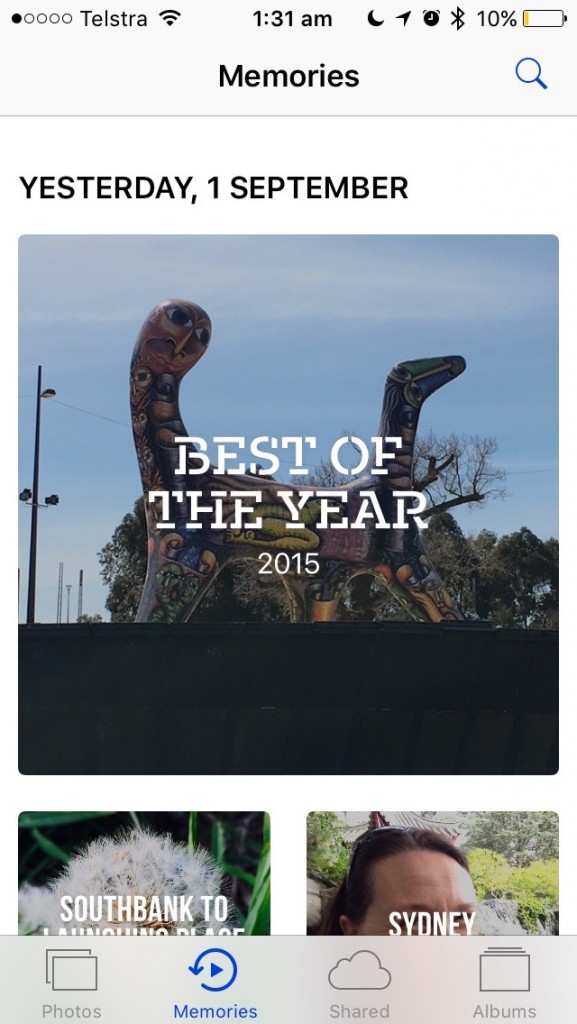 Believe me when I tell you all these features are just the tip of the iceberg and I have run out of time to discuss the Bedtime feature that encourages you to go to bed and wake up at the same time every day…. 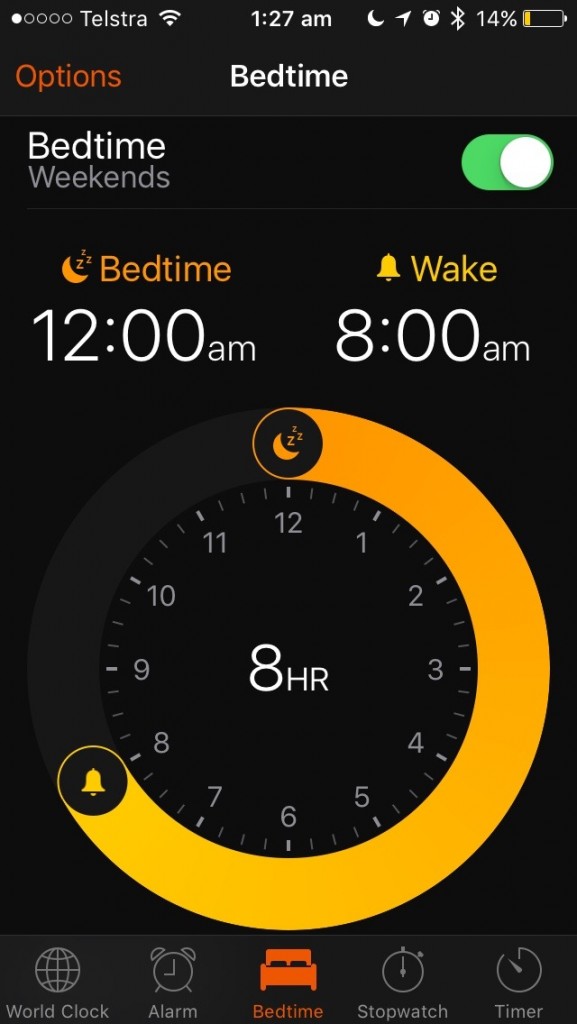 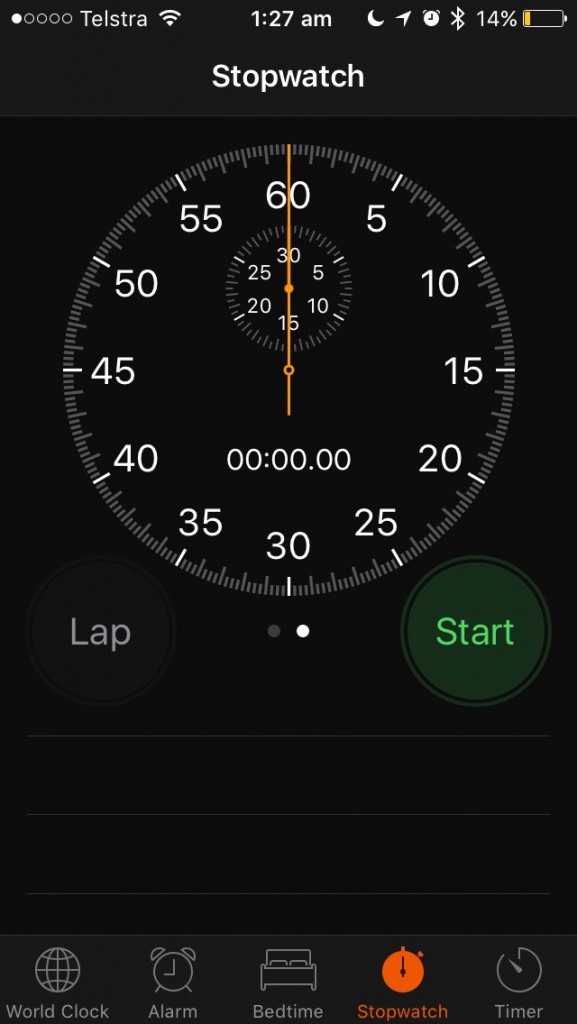 … the new Health app interface that gives you a better and clearer picture of your overall health and your carb intake, your blood pressure or the distance you walked in a day… 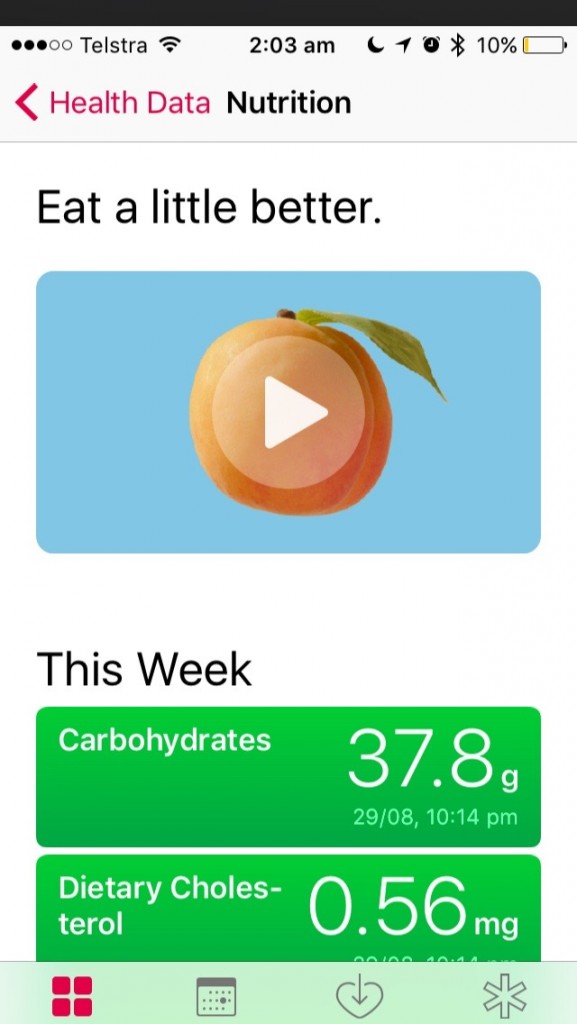 … and this says nothing about the fact that you can now finally delete those default apps that you don’t want taking up space on your iPhone; namely Stocks and Podcasts… 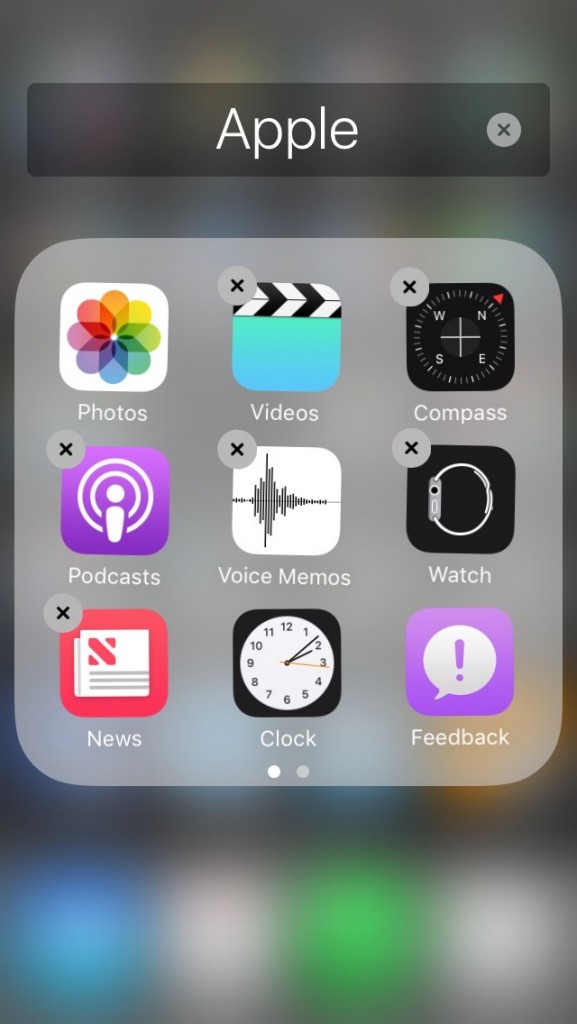 … and I have completely missed out all the changes made to the Music app with its clean and easier to read interface that makes the Music app a joy to use once again.

And, don’t get me started on the new Maps app that now has public transport information (even in Canberra) as well as a more comfortable look and feel when using it as a turn-by-turn GPS. 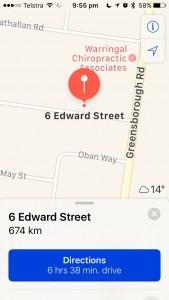 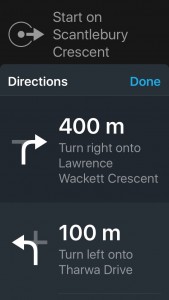 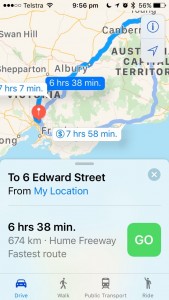 So, if I have inspired you to take up iOS10 – the biggest and most feature rich operating system in years – you can either wait until after Sept 7th or you can download the public beta right now from Apple.

Permanent link to this article: https://macservicesact.com.au/ios10-coming-soon/