Make your Mac play every type of video

iOS is growing, Android and others are dying 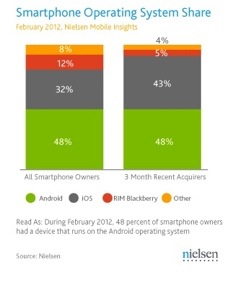 Just a couple of days after RIM (makers of Blackberry) announces that they ‘Got it wrong’, Neilson releases a report showing that the hemroid – sorry, Android, has stalled, iOS is growing and the others are dying a slow death.
None of this is a great surprise – everyone knows that the Blackberry is so last decade- but considering the Windows Phone never really started to grow it’s a shock (and something of a shame) that it appears to be dying an early death.
Andriod deserves to wither because it’s nothing more than a soul-less remake of iOS. It’s cheap and it looks cheap and recent reports have shown that of the limited number of apps available for the Android, all of them suffer from bad design and questionable performance.
But Windows Phone is different. Windows Phone is an attempt at something new. It’s well designed (if perhaps a little under designed in places) and it is (for the most part) fun to use. It too suffers from limited apps that have quality issues but this can only improve.
Using a Blackberry in todays smartphone dominated world is a bit like carrying around an abacus instead of a calculator or a sun dial instead of a watch. An Andriod is a Chinese Ferrari and looks OK until you actually get into it and discover it has plastic seats and a dashboard made from recycled asbestos. IOS is the first and the best of its breed and- provided you run it on the Telstra network- is still the best.
But, if for some reason, you cannot or do not want to buy an iPhone please consider Windows Phone 7. It needs some support and in the face of an Android- it deserves it.

Permanent link to this article: https://macservicesact.com.au/ios-is-growing-android-and-others-are-dying/